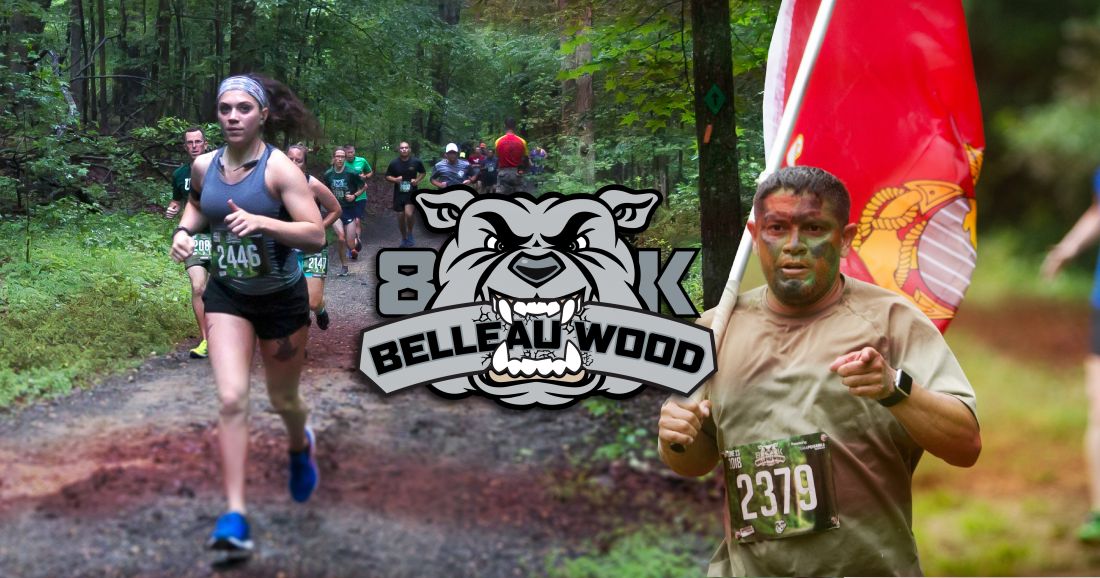 Memorial Day offered an opportunity for reflection and a chance to remember those who served and sacrificed for our nation. Such reflection is present on the MCM and Historic Half courses along the wear blue Mile. The Marine Corps Marathon Organization honors those who have served by celebrating the storied history of the United States Marine Corps through running events that bear the name of important Marine Corps dates, terms and iconic battles including the Belleau Wood 8K to be hosted on Saturday, June 15 aboard Marine Corps Base Quantico.

The battle fought in the forest of Belleau Wood in June 1918 was the first major battle for the US Marines in World War I. General John J. Pershing calling stated that it was the most important battle fought by U.S. forces since the Civil War. It was during this battle that the U.S. Marines earned the nickname “Devil Dogs.”

The 4.97-mile Belleau Wood 8K will fittingly take runners through the woods and trails of Quantico, affording every participant the opportunity to emulate the tenacity of a ‘Devil Dog.’ Registration is still available and costs $45. Runners will receive a T-shirt with a uniquely original design, commemorative bib and a stunning finisher medal.

Semper 5ive – Mirroring the Latin phrase that has become the motto of the Marine Corps. “Semper fidelis” translates to “always faithful” or “always loyal.” The Semper 5ive is a five-mile run in Fredericksburg that takes place in May during Historic Half Weekend.

Devil Dog Double – Showcases the can-do spirit of the U.S. Marines, as well as their nickname, by combining two distance challenges into one event during Historic Half Weekend, held annually in May.

Recon Ruck – A two-fold honor combining the “ruck” – Marine speak for moving quickly with a pack full of military gear over rugged terrain – with the nickname of the U.S. Marine Corps special operations force, the RECON Marine. Known fully as Marine Corps Force Reconnaissance, these Marines represent the elite of the elite. The Ruck happens on June 15, same day as the Belleau Wood 8K. Registration is still open for the inaugural Ruck.

Medal of Honor 8K – The final event of 2019 celebrates the highest award for bravery that can be given to any individual in the United States, the Medal of Honor, and takes place on the golf course named for that award. The 2019 Medal of Honor 8K happens on December 7 with registration opening on June 5.

“These running events are meant to challenge individuals physically, as well as stimulate interest and awareness in Marine Corps culture and history,” said Rick Nealis, Marine Corps Marathon Director. When you #RunWithTheMarines, it’s an all-in mind and body experience. Oorah!