Michelle Kinsella – On Running to Honor her Father 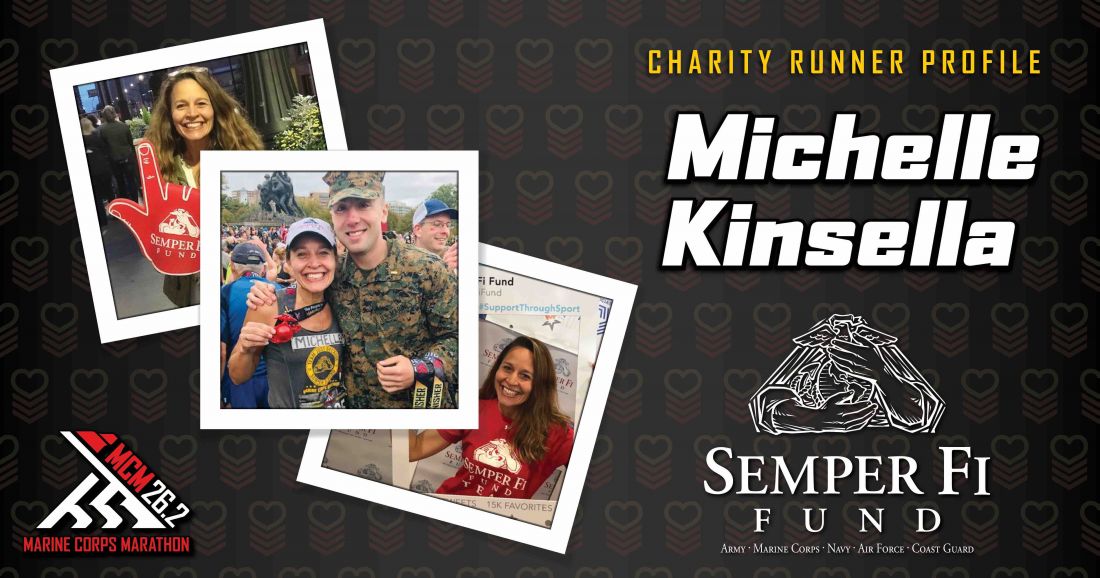 In 2010, Michelle Kinsella ran her first marathon in honor of her Marine dad Sgt Bob Poulin, and she hasn’t stopped running since.

Kinsella watched her father, a Vietnam Veteran, suffer through the pain of post-traumatic stress disorder for more than 40 years before seeking the help of a counselor. She was scared when her father went back to Vietnam for a Battlefield Tour of the country in 2009. But, it was exactly what he needed.

“When he came home there was a lightness about him, I physically felt that difference,” said Kinsella. “I had to run the Marine Corps Marathon (MCM) to show my dad how proud I was of him for taking care of himself.”

It was then while looking at the list of MCM Charity Partners, she saw Semper Fi & America’s Fund and immediately knew that was the one for her. “My dad is a proud Marine would always say ‘Semper Fi,’” Kinsella noted. “I can vividly see him wearing a red shirt with yellow lettering of Semper Fidelis. Come to think of it pretty much all of his clothing, shirts, jackets and hats are United States Marine Corps (USMC) branded, even his car has both USMC and Prisoner of War bumper stickers on it.”

Kinsella started the ‘Just Because’ team and began fundraising as a community athlete for Semper Fi Fund. Now almost 11 years and 19 marathons later, including 10 MCMs, Kinsella and her team has raised over $342,000 for Semper Fi Fund to date.

“This year, with COVID-19 has been more challenging, but we will reach $350,000 for the Fund this year,” said Kinsella, who is running her first 50K as part of the MCM’s Semper Fidelis challenge—which requires runners to complete the Marine Corps Historic Half or Devil Dog Double in Spring and the MCM or MCM50K in Fall. “Knowing I am running for the Fund provides the purpose for me to do the best I can to help our service members.”

Kinsella completed the Historic Half, her first virtual event, in 04:08:40 and found the experience oddly surprising. “Believe me, I absolutely love hearing the roar of the spectators and hearing someone cheer my name and read the amazing signs, but I realized I actually didn’t need all the cheers to motivate me. I had all I needed inside of me to complete the 13.1 miles.”

For Kinsella, it’s always in honor of her dad who was recently diagnosed with anaplastic thyroid cancer.

“My dad came home from Vietnam feeling alone and not cared for. No service member should ever feel that way. The Fund makes sure of that,” said Kinsella “The amazing work they do tirelessly to support our injured service men and women…it matters!”

Her advice to first-time marathoners running the virtual MCM on their own, “Run with your legs and if they get tired, run with your mind and if that isn’t enough, run with your heart and you will get to the finish line. The best thing about your first marathon is you are getting a personal record.”