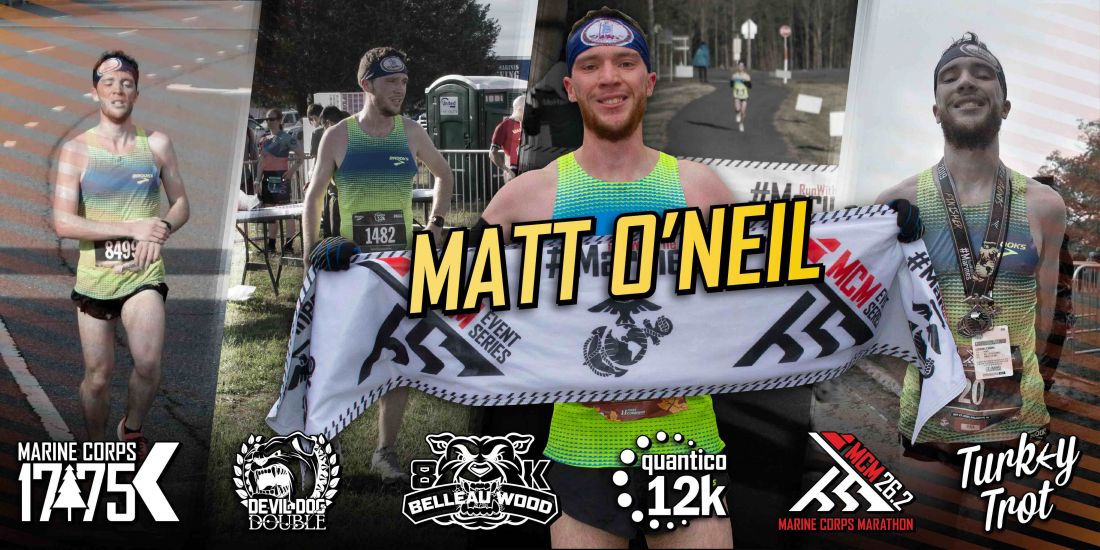 Matt O’Neil’s #RunWithTheMarines started when he was six years old. Growing up in Northern Virginia, he spent most of his formative years participating in the Marine Corps Marathon Kids Run while dreaming of running all 26.2 miles of “The People’s Marathon” and taking his place among the top finishers.

O’Neil joined the cross-country team in high school and began running competitively all the way through college. After graduating he took a break from the sport, but never fully outran his love for running.

“I run because I love everything that it has brought into my life: good health, great friends, and a sense of happiness,” noted O’Neil. “I love the grind of training because it gives me a sense of purpose and I’m proud of myself when the hard work pays off with great results.”

In 2018, the 24-year-old began a slow return to running and decided he wanted to train for marathons but didn’t know where to start. With some help from his former coach, O’Neil tackled smaller Marine Corps events and successfully completed his first half marathon in September of that year, before setting out to accomplish the Marine Corps Marathon the following month.

“It hurt me to not be able to finish that race, but it inspired me to come out in 2019 and try and win each race in the event series, as well as place in the marathon,” said O’Neil who stayed true to his word and dominated the 2019 MCM Event Series, winning the 17.75K in March, the Devil Dog Double in May, the Belleau Wood 8K in June, the Quantico 12K in August and the Turkey Trot 10K in November.

Following up on his impressive back-to-back wins, O’Neil also secured the third place finish at the 2019 Marine Corps Marathon in October clocking in at 2:31:30.

In addition to being motivated by the Washington Nationals’ “Stay in the Fight” postseason slogan, O’Neil credits his former teammate and best friend for being his inspiration.

“She messaged me the morning of the race: “Remember the hurt, the hurt is good”. I wrote it on my arm and kept looking down on it when I wanted to quit multiple times. But I finished the race in the top 3, accomplishing my goal. That race was for her and all that she has taught me.”

“My focus is now on the 2020 Boston Marathon. After that, I may delve into some trail races or you may see me at the MCM 50K!”