Celebrating Kids who are Running Virtually, Too 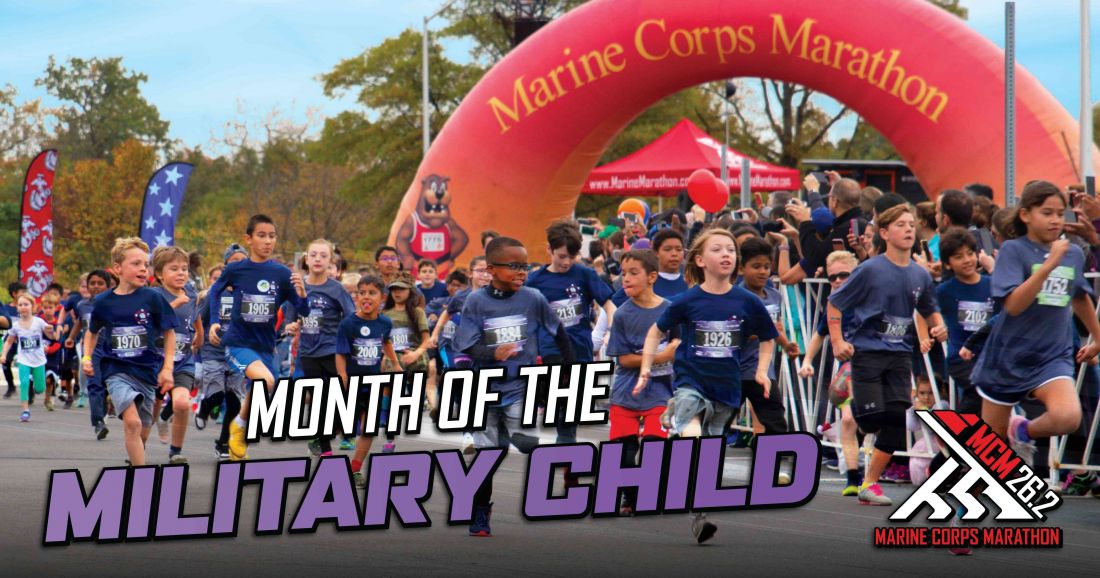 Since 1986, April has been designated by the Department of Defense (DOD) as the Month of the Military Child to honor and recognize the sacrifices that military children make when one or both parents are in the military.

Military families and children are great sources of inspiration. By virtue of having one or more of their parents in a service, enduring numerous moves away from friends and families, seeing a parent or parents deploy, and many more moments of change, these youngsters may have an added advantage coping with this pandemic.

During this time, many young runners have participated in Marine Corps Marathon Organization (MCMO) events virtually – including the 17.75K, Semper 5ive and even the Historic Half marathon. These events have been cancelled due to the rapid development of the novel Coronavirus.

It is impressive to see the younger generation train, run and stay active, while still social distancing. Meet some young runners who are also from the military community.

Elijah Jay, 13, an eighth grader in Jacksonville, NC, who recently completed both the 17.75K and the Historic Half, virtually, started running when he was eight years after joining his school’s running program. Joined by his younger sister and father, Elijah has been running to stay healthy and active.

Elijah's father, Edmund Jay Jr, has been serving this country as a United States Marine for the last twenty years. His mother, Heather Jay, is no stranger to military life. She was a military child whose father served in the United States Navy. As a family, the Jays have moved four times including a stay in Okinawa, Japan.

Elijah planned to participate in the Half and 17.75K, and was looking forward to traveling to Fredericksburg, VA and Prince William Forrest Park. The cancellation of these events didn’t deter Elijah. “Even though the events were cancelled, I could still run them.”

Elijah has been able to run around a nearby golf course and in his surrounding neighborhood. He is thankful for the ample space, affording him the opportunity to run safely and at a socially acceptable distance.

As a military child, Elijah, is aware of the significance of Month of the Military Child. For him, it is a soothing reminder that he is not alone. He is thankful for everything his father does for his family and for the countless service members who do a lot for our country. In this unprecedented time, he says he takes a moment to pause and pray for our nation and all those military families that have a member deployed.

Elijah looks to the future with a positive outlook including his first Marine Corps Marathon (MCM) later this year.

Kayla Davies, 17, is a junior at Massaponax High School in Fredericksburg, VA, and a member of the cross country team. Even in a time of uncertainty, she looks forward to going to college next year and joining an ROTC program. One day, she hopes to be part of the coveted Marine Corps Officer Program.

Kayla started running when she was 10 years old. She started by running local events in downtown Fredericksburg, VA. Then in 2013, Kayla registered for her first Historic Half in Fredericksburg, VA. Since then, she has gone on to run an impressive 16 half marathons and two 24 hours/50 mile events.

In 2014, her entire family joined her to run the Historic Half. This included her father, Robert, who is an avid runner and a role model for his family. The entire Davies family is aware of the sacrifices that military children and their families make, including their own, and have all become active members of Team Red White & Blue (RWB) – a nationwide non-profit that is dedicated to bringing veterans back into civilian life through mostly athletic and social events.

Robert served in the US Navy until 1997. Today, he proudly serves as a government civilian in Marine Corps Systems Command.

As Fredericksburg locals, the Davies will be able to run most of the actual Historic Half course on their virtual runs. For Kayla, she looks forward to running up the infamous Hospital Hill. It is a hill that Kayla and her father see as a symbol of strength and determination in a time when so much seems gloomy.

“You don’t remember much of the actual course, but you always remember Hospital Hill.” And although Kayla and her father will be running alone this year, they are just happy to be healthy enough to run the course and finish another Historic Half event.

Jordan Ramirez does not have parents in the military. But, like many Americans, he has many extended family members that proudly serve or have served in the military including his uncle Jesse Cabadas and cousin Brian Ledezma, both Marines; his cousin Richard Attar in the Air Force; his cousin Erick Ledezma of the US Navy; and his cousin Joe Rodriguez and uncle Gabriel Attar, US Army.

Jordan, 11, is the youngest of four children, has been running since the age of 4 with his sister, Bianca. For Jordan, seeing his sister, a distance runner, complete seven marathons on all seven continents at the age of 12 provided the inspiration for him to pursue this quest as well.

At age 4, Jordan completed his first 5K while waving the American Flag throughout the race. He ran his first MCMO event in 2016 – the MCM Kids Run at the Pentagon, while his sister Bianca ran the MCM. Last year, three of the Ramirez family members ran again, this time Jordan and his mother ran the MCM and his sister Bianca completed her first 50K.


When Jordan set out to complete his seven marathons in all seven continents, it was only befitting to end the year running the MCM.

Jordan is fully aware at his young age, that the world is going through something that is affecting all facets of people’s lives, including his own, but he has had some pretty outstanding role models, like his family and the men and women he chooses to honor with his running. “I want to keep healthy; the challenge of completing the miles is in you and I love the challenge.” Jordan keeps up with his training and active lifestyle by running on the treadmill and outside at a socially acceptable distance from others.

Jordan can’t wait to be able to run another race and he reminds himself of all the fun he has doing it and crowds that will be there cheering.

Family members can still register to run Historic Half Weekend events virtually. And remember to download the free audio experience to accompany your Historic Half no matter where you run.

Veronica Gutierrez is a proud military spouse and an avid runner. She joined the MCM Organization as a marketing specialist in October 2019.