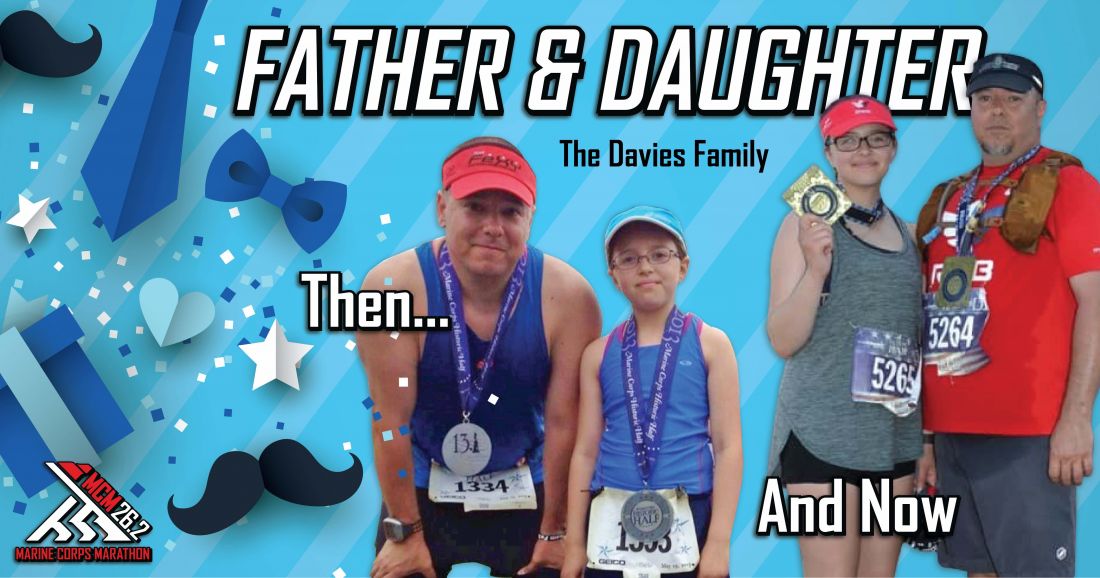 Robert Davies and his daughter Kayla have been running together since 2013, a tradition that’s sacred to both father and daughter.

“We trained together every step of the way,” said Davies on the pair’s first Marine Corps Historic Half. “In the early years, we typically warmed up a full mile and then every half mile we took a small walking break. The point wasn’t for her to get a specific time, but rather to enjoy the race journey, high five every Marine on the course and earn her shirt and medal.”

“Nowadays she’s far faster than me,” he continued. “But we still line up together and run a mile or two together before she takes off to conquer the course at her speed. I was, and still am, in awe of her persistence and personal perseverance.”

Davies initially got into running in 2010 for his health and to set an example for his family. Since then he’s participated in 10 Historic Half events and five Marine Corps Marathons (MCM). A former U.S. Navy serviceman currently working as a government civilian in Marine Corps Systems Command, the 47-year-old not only inspired his daughter to start her own running journey, but to follow in his military footsteps. 17-year-old Kayla is looking forward to one day becoming a U.S. Marine Corps officer.

As Fredericksburg locals, the father-daughter duo were able to keep up with tradition and run most of the actual Historic Half course – including the infamous Hospital Hill – for the 2020 virtual event.

“I really like running this race and this course, so I really didn’t give any thought as to not running it,” said Kayla. “It’s important to me and I hope I can keep running these races with my dad.”

“A tradition I hope we can enjoy for decades more,” her dad added.