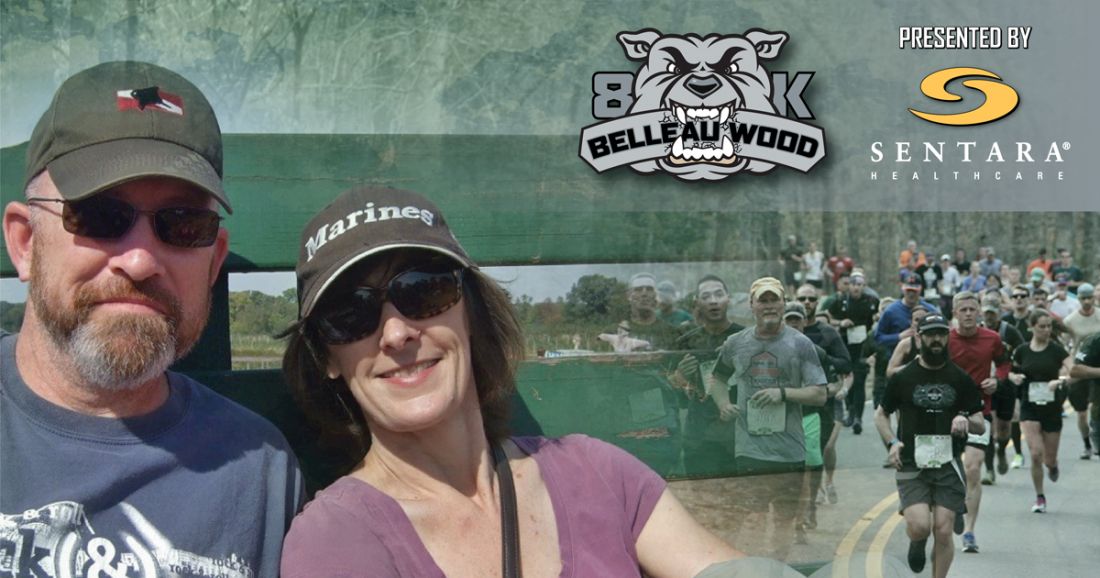 Dakota Wood’s last name isn’t the only thing connecting him to the Battle of Belleau Wood. As a retired U.S. Marine Corps Lieutenant Colonel, he honors the sacrifice and heroics of the Marines who fought in the Battle by participating in the Belleau Wood 8K with his wife, Dixie Wood.

Dixie learned of the Belleau Wood 8K and encouraged her husband to run alongside her as she enjoys running outdoors, the healthy nature of exercise, and setting and reaching new goals. Dakota jumped at the idea of sharing the experience together, describing it as a “double-win” for him as he gets to support his wife in her desire to run and gets exercise.

“She finds therapeutic benefit in the activity [running] and the Belleau Wood 8K provides a terrific opportunity to combine her love of running with her love for our Corps, something she quickly developed and embraced by marrying me early in my career as a young Captain,” Dakota shares about his wife, who he shares is his constant inspiration.

The Wood’s tie to the event runs deeper than appreciation of their last name, as he has visited the Belleau Wood battlefield in France during his time in the Marine Corps. “I was blessed to be able to walk the wheat field and woods nearly 20 years ago while a student at the Marine Corps’ School of Advanced Warfighting.”

Wood graduated from the U.S. Naval Academy in 1985 and later went on to earn advanced degrees from the College of Naval Command and Staff, U.S. Naval War College, and the Marine Corps’ School of Advanced Warfighting. During Wood’s 20 years of service, he traveled to five continents, more than thirty countries, and conquered multiple deployments to Asia, the Balkans, the Mediterranean region, and West Africa. Even with all these travels, Belleau Wood made a lasting impression.

“My colleagues and I toured many battlefields across Europe to study the tactics and operational art associated with key moments of the World Wars,” Dakota shares. “[The Battle] has remained a real touchstone for me as I have considered the evolution of war and its implications for the Marine Corps.”

The lessons have stayed with him during his career as he has served in defense and national security affairs in multiple assignments, most notably with the Commandant of the Marine Corps and with the Secretary of Defense’s internal “think tank.”

The Belleau Wood 8K commemorates the 100th anniversary of the Battle and both Dakota and Dixie look forward to this special MCM event. Dakota shares, “I’ll make every effort to keep the pluck and determination of Dan Daly and his fellow Devil Dogs in mind while run-walking the hills of Quantico on June 23rd.”

Sentara Healthcare in Northern Virginia is proud to be the exclusive healthcare sponsor of the 2018 MCM Event Series and looks forward to meeting the Woods and all the Belleau Wood 8K participants at the Sentara tent in the finish area. To learn more about local Sentara Healthcare services, visit Sentara.com or call 1-800-SENTARA.

My Health. My Community. #MySentara.