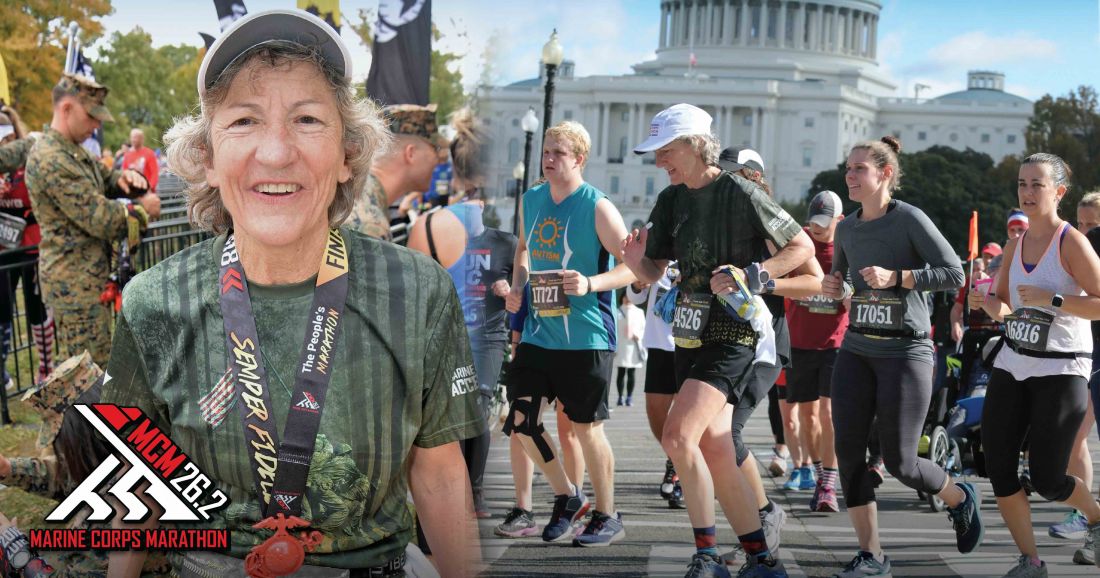 On March 24, 2018, Marilouise Beeman successfully completed the Marine Corps 17.75K in Prince William Forest Park with a time of 1:41:45. She placed second in the female 55-59 age group, but as of January 2020 was determined to be the rightful winner after the previously announced age group winner was disqualified from the event for cheating.

Beeman said she was at lunch when the call came in, but assumed it was a telemarketer and ignored it. When she later listened to the message, she was surprised to hear that it was the director of the Marine Corps Marathon Organization (MCMO) calling.

“He assured me in the message that I would be pleased with what he had to say and asked that I call him back immediately,” said Beeman. “Of course, I was intrigued and curious!”

Beeman noted that she initially registered for the Marine Corps 17.75K in 2018 because of her son, a Marine then stationed at Quantico, and the guaranteed access to the Marine Corps Marathon. She was also excited to see her brother, a retired Marine who lived close by, and convinced him to run both events with her.

“When I ran the 17.75K in 2018, I very much enjoyed the race and probably looked up the results and saw that I ran okay for my age group,” she admitted. “I certainly did not expect an award, so when I learned that I was to be awarded the first place for my age group, I was pleasantly surprised.”

She added: “What really intrigued me was the length to which Rick and the MCM Organization went to not only seek me out and let me know this information, but also to make sure that a wrong was corrected. That speaks volumes for the Marine Corps and the values held therein.”

The award was delivered to Beeman, 61, this week although original plans were to present the award at the Motivational Dinner on March 27, the evening prior to the 17.75K. However, with the cancellation of the Dinner and the event amidst the developing COVID-19 situation, the MCMO made getting the award to Beeman an immediate priority.

“Marines pride themselves on their Corps values of honor, courage and commitment. The Marine Corps Marathon Organization shares these values and holds our participants to those same standards,” said MCMO Director Rick Nealis in a statement. “Integrity and personal accomplishment will be rewarded even if it takes us years to bestow the award to the true winner.”

Beeman said she’s humbled by the attitude and effort of Rick and his team. She’s even hoping to redeem herself at the 45th MCM after running the Marathon while injured in 2018.

“I look forward to…being surrounded by other runners and the MCM organizers who put on a great event!”

Join Beeman at the 2020 MCM by registering for the event through the Lottery until March 31.