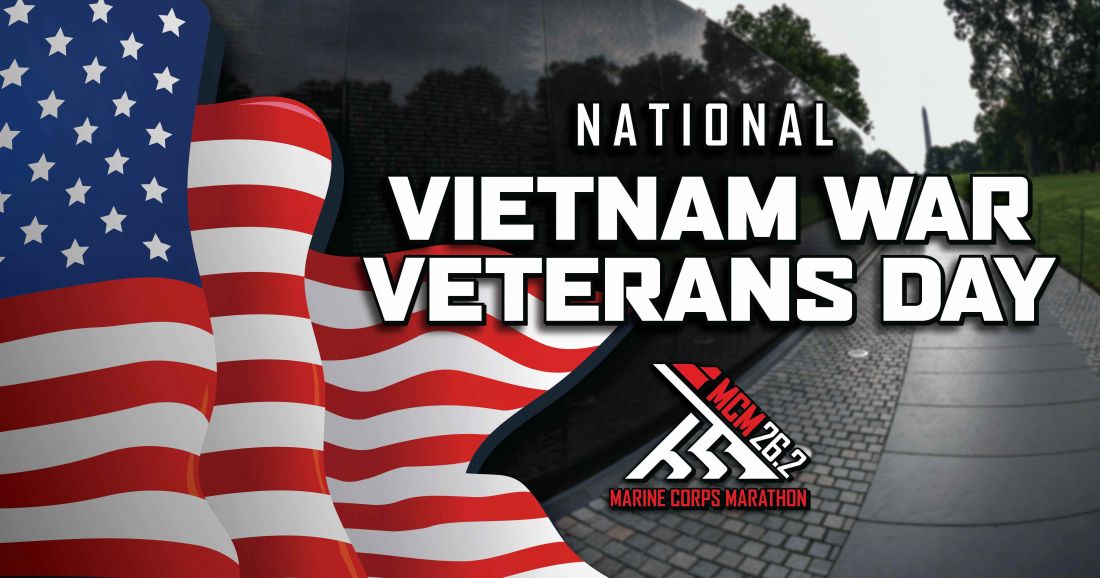 Running 26.2 miles is an incredible feat, but for those participating in honor of a family member who served or is serving, the accomplishment serves a bigger purpose. As we remember those that have fought and sacrificed for their country, we recognize the family members who share their stories.

Sherry Parsons decided to #RunWithTheMarines in 2019 to honor her father, Harold Parsons, who served in the United States Marine Corps for four years during the Vietnam War and retired as a Sergeant E5. Although she was young during his enlistment, she knew she wanted to pay homage to his years of service at her very first Marine Corps Marathon (MCM) event.

“I wore a sign on my back with the names of my two grandfathers, my dad and my daughter, who is in the Coast Guard. I have medals from the Marathon, 17.75K and Semper 5ive,” said Parsons. “I gave them all to my dad who proudly hangs them next to his American flag.”

Parsons is glad to have trained before attempting to run 26.2 miles in the pouring rain. A Virginia native who grew up in Nebraska, she began running in 2017 by participating in a 5K. Her main goal was to run a marathon successfully and she knew the finish line would be sweeter with Marines in uniform waiting for her with a medal.

Elana MacGilpin started her MCM journey in 2019 with the help of the American Cancer Society and the memory of her Dad to motivate her. Her father, Marvin Goldberg, was Active Duty in the United States Army working as a social worker at Walter Reid to aid injured soldiers and their families.

“He passed away ten years ago,” MacGilpin shared. “He really felt it was an honor to work with injured soldiers and help them come to grips with their injuries and plan their life after war.”

Goldberg began his military career at Fort Benning before traveling to Washington, D.C. He got married while in the Army. His time at Walter Reid inspired him to earn his Master’s degree and go on to a career in healthcare to help military families everywhere.

“Running in my Dad’s memory, on the 10th anniversary of his passing from prostate cancer, I knew I wanted to fundraise for the American Cancer Society,” MacGilpin said. She successfully raised close to $3,000.

MacGilpin started running seven years ago and completed her first marathon in 2017 in her home state of Connecticut. After that, she began a strict 16-week training plan for the MCM in October. After fighting back emotions at the wear blue mile, MacGilpin proudly received her finisher medal from U.S. Marines at the foot of the Iwo Jima Memorial.

Michael Fisher and His Siblings Ran with Their Dad, Ken Fisher

Ken Fisher served in 1st Battalion 1st Marine Regiment, 1st Marine Division in Vietnam in the Arizona territory in 1969. His time resulted in a Bronze Star (with Combat V), Purple Heart and a Vietnamese Cross of Gallantry amongst other accolades. By the time he retired from the U.S. Marine Corps, he lost his lower left leg and survived other critical injuries.

In late 2018, Michael and his siblings decided it would be special to run the 44th MCM as a family and push their father, a dedicated lifelong Jarhead, as well. They reached out to the Semper Fi Fund and used the platform as a way to raise money for other disabled combat veterans. The siblings paid for a custom marathon chair for their dad and began training.

But they pushed through.

“Everyone was truly amazing cheering us on through the storm and up the hills and everything. We started as a family, covered every inch as a family and crossed the finish line together as a family.”

Michael ended up re-breaking one of the bones in his foot and his sister went through excruciating pain, but he described it as one of the most memorable experiences of his life.

“No quit in any one of us,” says Michael. “And the respect our father received from runners, workers and Marines alike all along the course was truly amazing and I am forever grateful.”