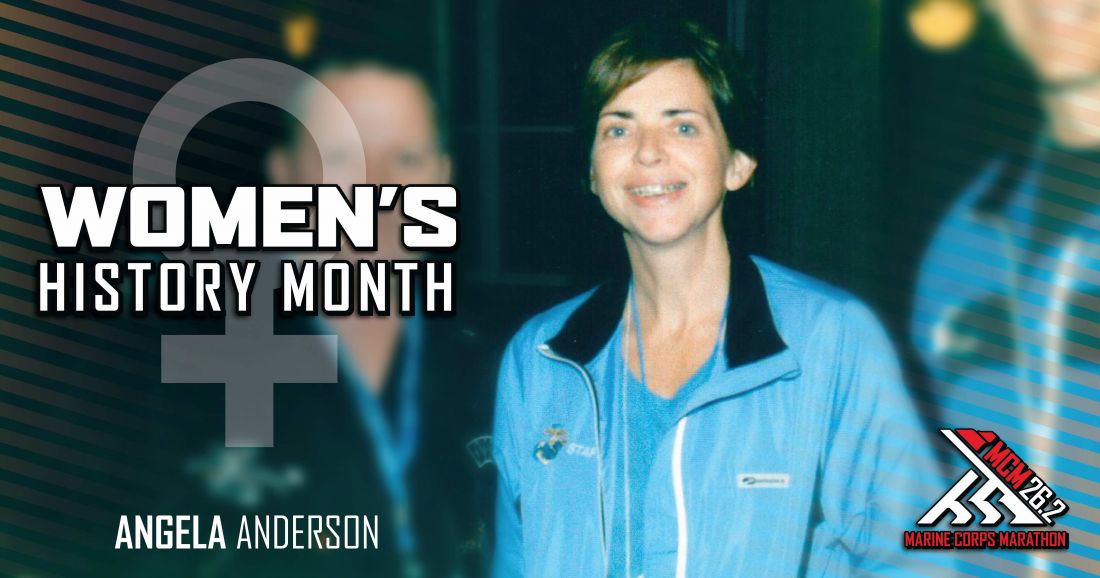 When Angela Anderson joined the Marine Corps Marathon Organization (MCMO) in 1994, she was the first civilian hire in a brand new position. At that time, the Marine Corps Marathon (MCM) was the only event produced by the Organization and it was held on a much smaller course with approximately 11,000 runners. Today, the MCM is a weekend event and one of the largest marathons in the country.

“I consider myself very fortunate to have been here at the right time to experience the running boom and have a critical role in growing the organization to what it is today,” said Anderson. “Working with Marines and Sailors and a very dedicated staff and volunteer group and being a runner, I have a dream job.”

Anderson is now the Deputy Director of Business and Marketing at the MCMO. A running coach with numerous marathons and triathlons under her belt, she received her Long Distance Coaching certification from RRCA (Road Runners Club of America) in 2014.

Originally from Fuerth, Germany, Anderson credits her love of running to her father.

“My father took us outside to run and bike at a very young age, instilling the love of exercising in me,” said Anderson. “As a young mother with little money or time, I took up running again and never stopped.”

She is on her way to completing the Abbott World Marathon Majors, a series consisting of six of the largest and most renowned marathons in the world. Her proudest running accomplishment so far is qualifying for and finishing the Boston Marathon in 2010.

“To this day I have the medal with me in my car and when I think something is too hard, I look at it and it gives me a boost to push through anything in life.”

Anderson loves her current position at the MCMO. She enjoys developing programs to enhance the event experience for runners and spectators alike and seeing it to fruition. The challenges that come with research, development and executing such a large scale event like the MCM Weekend makes the job more rewarding for her. Her favorite part, however, is working with a very creative and focused staff with innovative and visionary ideas that help to make each event a success.

“Having many repeat runners and seeing the excitement on their faces make me believe we do a very good job.”

And she cannot imagine herself anywhere else. Even if she wasn’t working in the running industry, Anderson believes she would still be in the sports industry professionally… and still running personally.

“Running is a very rewarding sport and for me, it’s a lifestyle. I can’t see it any other way.”

Her advice to anyone thinking about running a marathon for the first time? “Get a good training plan, enjoy the training runs and only look at finishing the race, not a particular finish time. That powerful feeling of achievement and accomplishment will be with you for the rest of your life.” She also recommends that first time marathoners enjoy the event and the surroundings.