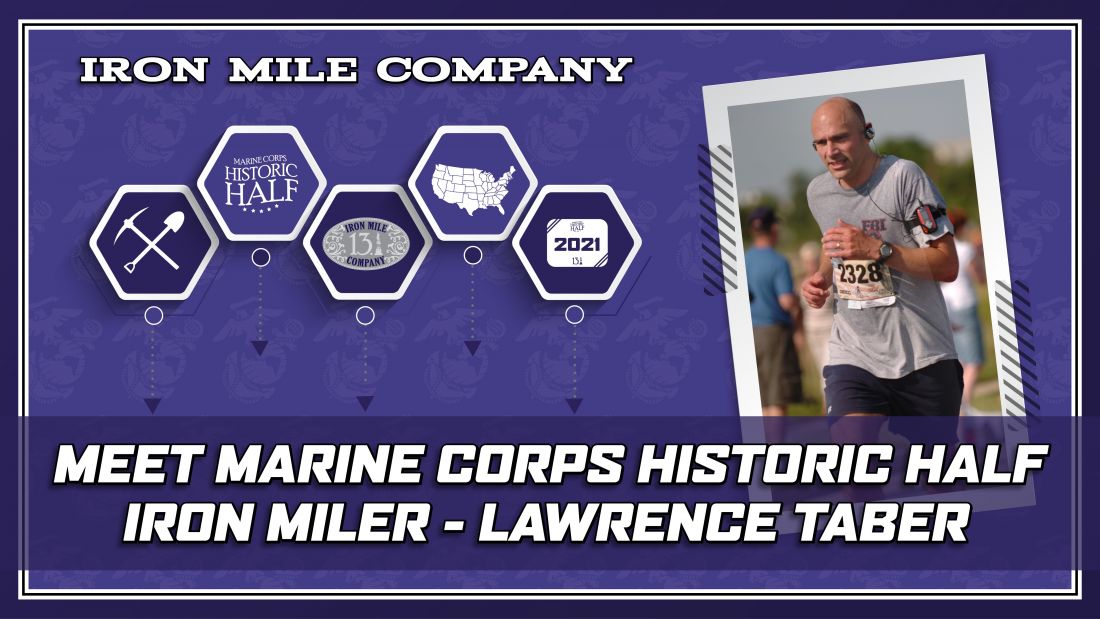 A Non-Commissioned Officer (NCO) in the Air Force, Lawrence Taber was exempt from the mandatory physical training at the end of each day while going through training. However, setting a good example for his fellow Airmen and NCOs, he joined the unit’s Run Team.

That was 1986. It’s 2021 now and Taber has completed two ultras, more than 20 marathons and 20 half-marathons, including the Marine Corps Marathon (MCM), the MCM50K and every Marine Corps Historic Half since its inception in 2008, making him a member of the exclusive Iron Mile Company.

“It’s human nature to want to be a part of something that’s bigger than all of us. The Iron Milers represent one of those things for me,” says Taber. “It represents endurance, dedication, loyalty. I know that our numbers will only get smaller, and I accept the responsibility of continuing my participation on behalf of those no longer able and those no longer with us.”

In addition to being a part of something bigger and carrying on the tradition for those who can’t, Taber looks at his streak as an annual challenge — a check-up, both mentally and physically.

“Even though I’m also running the MCM50K, there’s a good seven months between the 50K and the Devil Dog Double,” says Taber. “Especially when the world is anything but normal and hasn’t been for more than a year, running is the one thing that pushes me and helps me focus on a goal that’s become a part of my life for more than a decade.”

Taber has his virtual Devil Dog Double course already picked out on Marine Corps Base Quantico. Aiming for a challenging yet scenic route, he’ll be starting at Camp Butler and running in the direction of Camp Upshur. “I’ve got a good pit crew who park up the road a ways, cheer me on as I approach, rehydrate me, and send me on my way until the next marker where we meet up again. And because it’s on Quantico, the odds are pretty good that I won’t be the only runner out there. A shared experience is always a memorable one.”

For Taber, this and every other #RunWithTheMarines means that no matter how tired he’s feeling, how miserable the weather may be, or whatever else is trying to bring his spirits down, he knows he’s not alone. “I’ve got the Marines and everyone else who’s out there on the course with me all the way. It also means that I’ve got their backs as well.”

He continues, “Any time I’m feeling tired or like I just don’t feel like running to the next intersection, the next hill or the next telephone pole, I ask myself ‘Do you have a backpack on? Are you in boots? Is anyone shooting at you?’ If I can answer ‘no’ to those questions, then I know I have it far easier than any Marine who’s ever served in harm’s way to protect me, my family and my country. The least I could do is run a little bit farther.”

That’s the same advice he’d give to fellow runners, while adding, “Even at your slowest pace, just remember a few things. First, you’re already doing more than the person at home sitting on a couch and watching television. Second, no matter what, you know that you can make it to the finish. Your body might be trying to convince you otherwise, but you know you can do it. Third, run with a friend; even if that friend’s on a bike or in a car, just do it together because you’ll always have the experience to talk about years from now. And finally, running is as much a mental sport as it is a physical one. The body is capable of doing much more than we normally ask of it.”