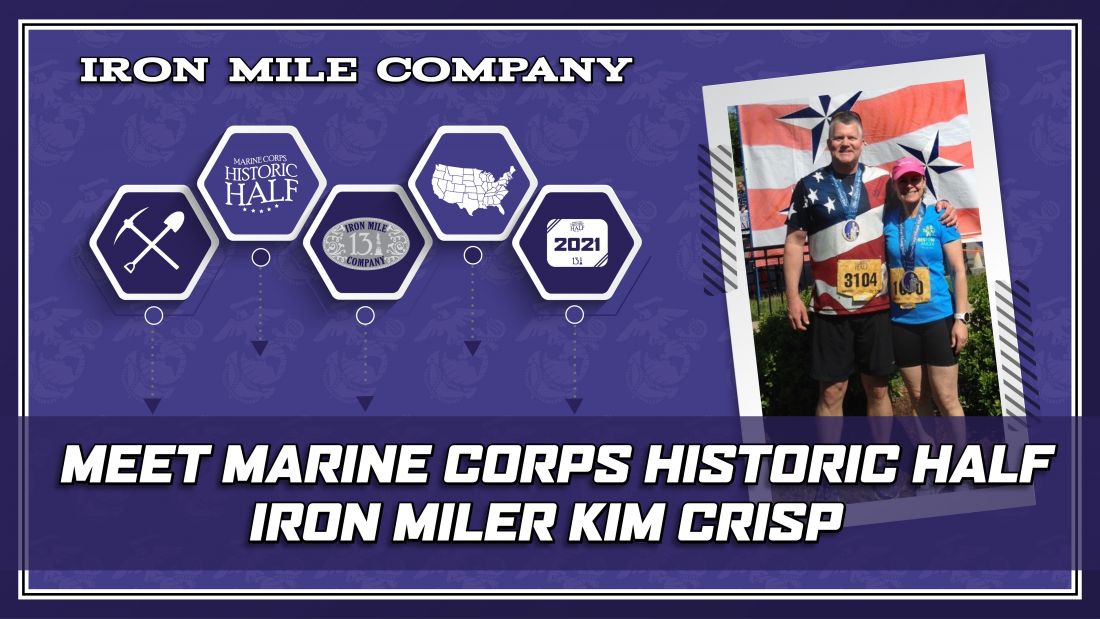 I have been running for more than 30 years, after starting at age 24. I was inspired by two roommates slipping on their running shoes four times a week and heading out the door for a run. I felt that I was missing out. One day, one of my roommates invited me to join her and I have never looked back.

My early years of running were just to stay fit and feel good about myself. In my late 30’s and early 40’s I was inspired to try winning 5K races in my age group and to my surprise, I did! This sparked something inside of me to begin running 10Ks, 10-milers, half marathons and eventually marathons. I ran my first Marine Corps Marathon (MCM) in 1999 and since then have ran several more MCMs. It was the 2013 MCM that was to be my most special, but more on that in just a bit.

I run in all kinds of weather. When my husband and I were training for the 2009 MCM, we trained in six-degree temperatures. Our eyebrows had frost on them and our electrolyte drinks had frozen by the time we were at mile 12. Mostly, I enjoy running in the warm weather, especially when it’s raining. There’s just something about running in the rain… makes me feel like a child again!

I’ve been a part of several running groups over the years, most recently with The Running Store in Gainesville, VA. For the past 10 years, I have been part of this incredible training group. Coach Mary Davison trained me to qualify for Boston. It was at the 2013 MCM that I realized one of my life’s greatest accomplishments by qualifying for Boston with a 3:46:30.

Running with the Marines is such an honor and privilege. I remember in 2018 when I got to the place on the course where the many men and women who have lost their lives for our great country are remembered, the Blue Mile, I stopped and began to cry because of the sacrifice they made for us. I always look forward to having the Marines place the awesome finisher’s medal around my neck for a job well-done. There is no better feeling than crossing the finish line seeing Marines lined up on either side waiting to award the runners for a job well done.

In 2008, I ran my first Marine Corps Historic Half and have never looked back. I recruit new runners every year to share the challenge and experience. One of the many reasons why I run the Historic Half each year is because the course is challenging. It’s not easy running Hospital Hill. I must admit it was nice not having to run Hospital Hill last year when I had to run it virtually from my home in Manassas, VA. My favorite part of the course is around mile 7, Historic Downtown Fredericksburg, when I get to see family members displaying posters cheering me on. They inspire me to keep going.

This will be the second year I have had to run it virtually. In 2020, I invited three other ladies in my running group to come alongside me running through the streets of Manassas. In 2021, I will begin my virtual Historic Half in Gainesville VA, running to Nokesville and back. My coach arranges for several pacers along the course and lots of cheerleaders! When crossing the makeshift finish line, there will be many supporters and yummy treats.

It’s going to be a slow pace this year as I’m recovering from four fractured ribs. But doggone it, I’m going to do it! I am determined to keep my Iron Miler streak going because this is the ONLY race I have run for so many consecutive years. I am honored to be in the Iron Miler club and it means a great deal to me knowing there are only a few of us that are still in the club. It will take more than a few fractured ribs to break this girl’s determination!