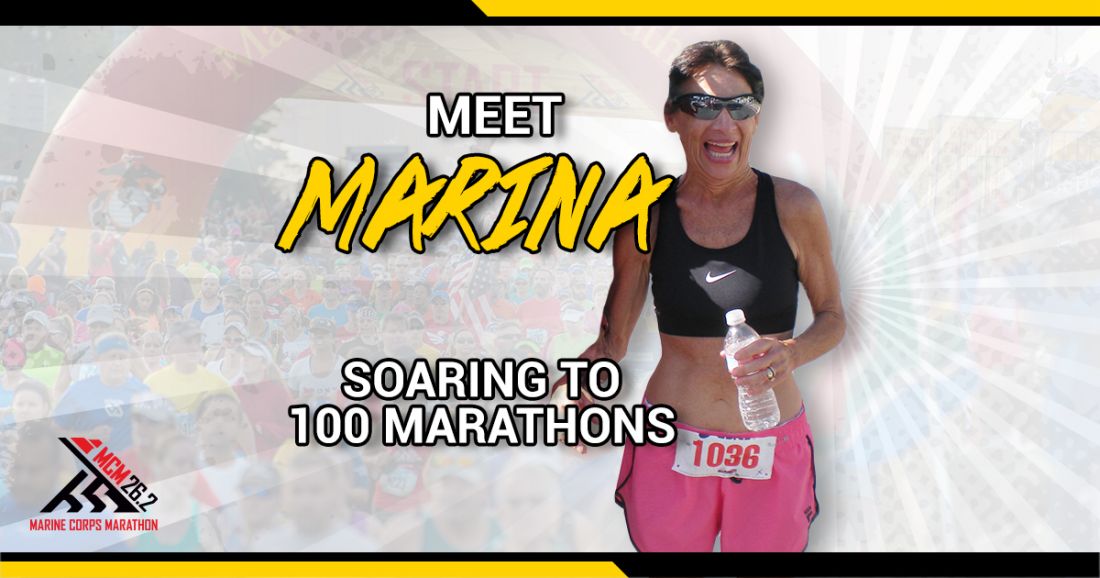 Marina Jones is a wonder. It was in her 40’s that Jones was the oldest female to qualify in two different Olympic marathon trials.

She completed the 1996 Olympic trials finishing the marathon distance in 2:49:54, which was just six seconds under the 2:50:00 Olympic qualifying time for women athletes at that time. Four years later, Jones completed the 2000 Olympic trials, running even faster, with a finish time of 2:40:00.

On Oct. 22, Jones will run her 99th marathon and for the very first time, she will run the 42nd MCM to mark that accomplishment. Of her 98 marathons, Jones has finished 50 of them under three hours. Her personal record (PR) is 2:45:00, which she accomplished at age 47.

“I started running in 1981 after I had my son, I needed to get back in shape to return to my job as a flight attendant,” says Jones. She ran her first marathon in Duluth, MN in 1982. After finishing 25 marathons, including Boston, she accomplished her first three-hour finish at age 40.

While not a smoker, Jones was diagnosed with Lung Cancer from smoke she was exposed to while working as a flight attendant for 35 years.

“I was diagnosed with Stage 1 Lung Cancer from second-hand smoke,” says Jones. “When I started working in 1972 smoking on the plane was permitted. After doing 81 marathons, I stopped to have a third of my right lung removed in 2008. In 2011, I got a bug to start doing marathons again. I still run under 4 hours with my best recent marathon finish in 2013 at 3:19.”

Jones currently lives in two different areas of California – in Palm Desert for half of the year, and Laguna Beach the other half. She coaches a women’s high school Cross Country team in Mission Viejo, CA near her home in Laguna Beach.

She will run the 42nd MCM with her 36-year-old son Benjamin.

“Benjamin and I are training together this summer and excited for our family to witness our run,” says Jones. “My goal is to get that 100 marathon in sometime in 2018.”

As an athlete who started running at a later age and still keeps running today, Jones has a few good tips to offer:

“While I have been running since my 30s, I am now 65,” says Jones. “I have had some injuries in the past but I am still excited to be able to still run.”