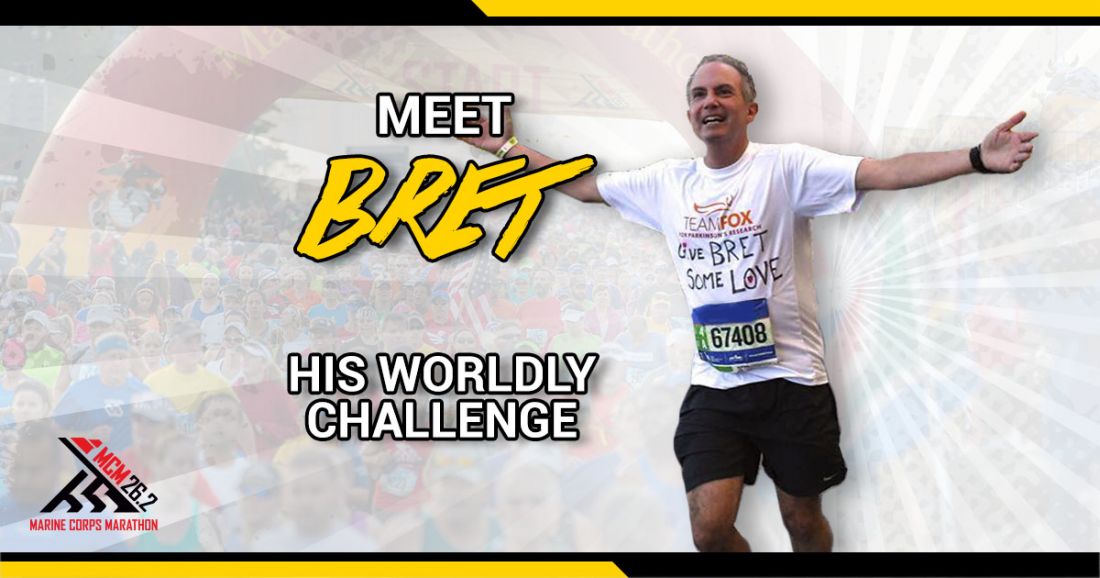 “I’m determined to live my life to the fullest as long as I can and not let Parkinson’s Disease dictate my lifestyle, as least as much as I can. I’m running the Marine Corps Marathon to stay healthy because having a goal like that motivates me to train and get in shape. The motto of the MCM is “Run With Purpose, Finish With Pride” — I intend to do both, hopefully vertically the whole way! I’m also using the MCM to prepare for the World Marathon Challenge in January/February 2018.”

After being diagnosed with Parkison’s Disease, Bret Parker has jumped full speed into running to keep healthy and fundraising for research as a member of the Patient Council for the Michael J. Fox Foundation. The attorney and Executive Director of the New York Bar Association is also busy training for his first MCM. Although he has successfully completed five marathons in his hometown, Parker says the disease can take its toll.

“Parkinson’s disease affects everybody a little differently,” he said. “For me, my symptoms include stiffness and rigidity on my right side (including my arms and legs), which makes it a little tougher to run at times. Sometimes I get painful foot cramps. I also sleep terribly, which also makes it hard to train. Exercising may be tough, but it’s also shown to help slow down the impact of the disease so it’s good for me to do this.”

Being diagnosed at 38 was completely shocking,” says Parker. “I knew very little about it and I wondered how long I would stay healthy, be able to work, raise my kids, etc. I was also anxious about how people might react so I didn’t tell most people for the first five years. I was happy when I finally “outed” myself because people have been so supportive. My symptoms have been progressing slowly, but they are progression – it’s a degenerative disease without a cure so it means that I will get worse over time.”

Parker says he’s looking forward to running with the Marines during his first MCM in preparation for the World Marathon Challenge – seven Marathons on seven Continents.

“I’ve done some pretty challenging things (including a skydive), but this [World Marathon Challenge] seemed like the mother of all challenges, which is perfect since I’m “celebrating” the 10th anniversary of my diagnosis this year and I turn 50 next year.”