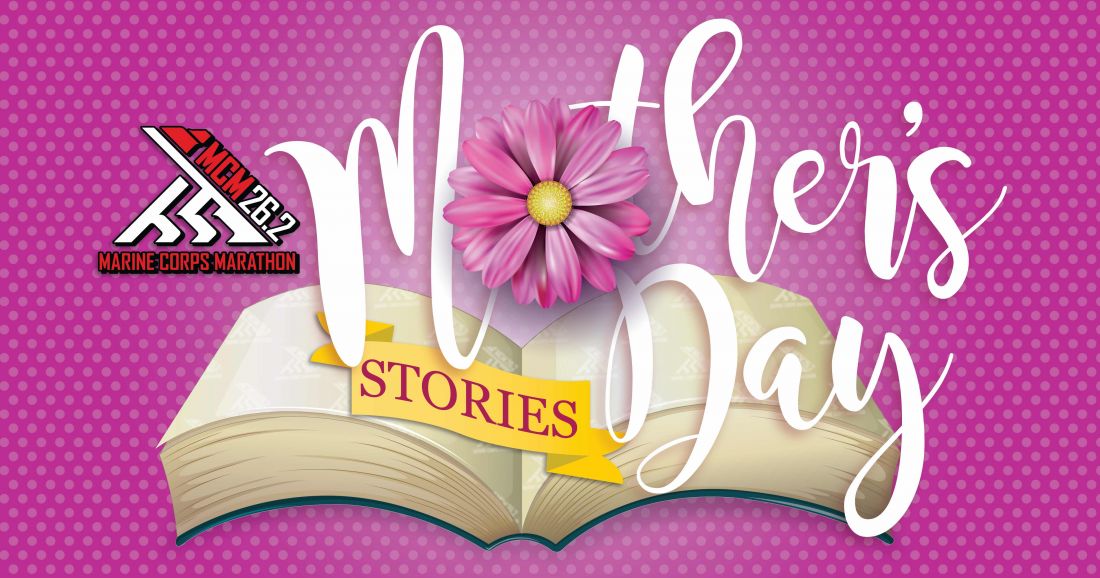 In celebration of Mother’s Day, the Marine Corps Marathon (MCM) community shared stories of their moms – the role models, the cheerleaders, the warriors and the heroes.

I originally started running this marathon in 2012 when a friend of mine told me about it. He told me if I was going to run a marathon, MCM had to be my first because it was the absolute best. Well, he was right. 2020 will be my sixth MCM.

My dad is a Marine who fought in the Vietnam War and I thought running the MCM would be a great way to show my appreciation to him. I knew my dad would not be able to attend the trainings because he is disabled. However, I asked my mom if she would go with me. Not only did she go with me, but she attended every training run with me and as the training runs exceeded 14 miles and I needed a “water girl,” she would wake up every Saturday morning at 4:30am and drive to the boardwalk of the Jersey Shore where we live and sit with a cooler filled with water, Gatorade and snacks for me as I ran in loops. This was true dedication on her part and it’s been going on every year since. Even when I had to take a few years off running for knee surgery, she was by my side then too.

My mom is 67 years old and the hardest worker I know. She works two jobs and cares for my dad, so going Washington D.C. every year for the MCM is her vacation that she looks forward to. She is my best friend, my cheerleader and my biggest life supporter. I can’t imagine life without her.

When I was away at college back in 1990, I got a call from my mom. I asked her what she was up to and she talked about a few things and then nonchalantly said she had run the Marine Corps Marathon last weekend. She had never ran a marathon before, so I was floored and amazed!

That call set off a chain of events that has influenced my life and my family’s life with the MCM a fun part of it all. We have ran the marathon together ever since 1991 with a missed one here and there due to having children, not getting in the lottery and just being out of shape. We both look forward to marathon day as it’s a celebration of life, fitness, family and a way to celebrate my mom. My kids, friends and other family members have ran with us over the years but the one constant has been me and my mom.

It’s funny, when I tell folks I run the marathon, they are somewhat impressed. When I tell them my mom runs it too, they are astounded. And while I know it will come to an end at some point as my mom gets older and just recently had a bad fall, I am hopeful that we can continue to run together. Even so, I will forever run the marathon in honor of and in recognition of how great my mom is and how great her influence has been upon me, my wife, my kids and so many others.

On April 7, 2003, my family received devastating news that changed our lives forever. My younger brother had succumbed to his injuries during his time in Iraq. 1stLt Jeffery J. Kaylor loved serving his country in the Army, a choice he made to follow in the footsteps of his father who also served in the Army for over 25 years.

When Jeff made the ultimate sacrifice for our country, my mom and I wanted to keep his memory alive. Jeff was an avid runner and he always wanted to run a marathon, especially the MCM, but my mom and I just didn’t have the courage to face the miles.

After several years of running the Army race and experiencing such emotion, we finally turned our attention to the MCM Organization’s events. One day, while training for the half marathon, we ran over 15 miles and that sparked us to sign up for the Marathon.

Our first MCM race was in 2010. Since then my mom and I have committed to running the MCM every year, in addition to other races, in memory of Jeff. We are extremely proud of my mom’s commitment to training and finishing the MCM strong; she’s even a member of the MCM Runners Club. When we run, we celebrate the meaning of life, love and happiness in memory of 1stLt. Jeffery J. Kaylor.

On April 21, 2018, I was talking to my mom on the phone. She had been recently diagnosed with Stage 4 lung cancer. We were talking about everything going on and she asked me what races I was running that year. I had a lot of running planned ahead of me for that year, but all I could think of was the Marine Corps Marathon. It would be my third time running the course, so I told her all my favorite parts of it and about the two times I ran it before. She went on to tell me how proud she was of me that I can run a marathon and all of my accomplishments. After a little while, we said goodbye. What I didn’t know at the time was that would be the last conversation I would ever have with her as she passed away one week later on April 28.

A month later my dad, a US Army Veteran, passed away and my training fell apart. I was considering not running, then I saw a friend post about Team Lungevity. They had a team running at MCM, so I reached out to them, they sent me a team jersey and I picked up my training again.

It was definitely not my best time, but I proudly ran my third MCM on October 28 in honor of my mom on her six-month angelversary.

Last year, I hit the start line again for my fourth MCM. I donned my Team Lungevity jersey and had a photo of my parents on my hydration pack. Right as I was getting to the bridge, the rain stopped and the sun came out, so I slowed down just a little since it was warmer. Another runner came up alongside me, and asked what Team Lungevity was and I told her about it, why I run for them and about my mom. I saw she had a charity shirt on and asked about hers, then we started walking a bit. Turns out she’s from my area and we’re now friends, we both plan on running MCM again this year.

I know my mom was with me when I ran that day, just when I was getting tired and trying to fight off negative thoughts, she brought me exactly what I needed: a little sunshine and some camaraderie. I am proudly running my fifth MCM this year in honor of my mom again.

Happy Mother’s Day to everyone celebrating this year! And remember, there’s still time for all the moms out there to register to run Historic Half Weekend events virtually. Download the free audio experience to accompany your Historic Half no matter where you run.