Getting by with a Little Help from Your Friends 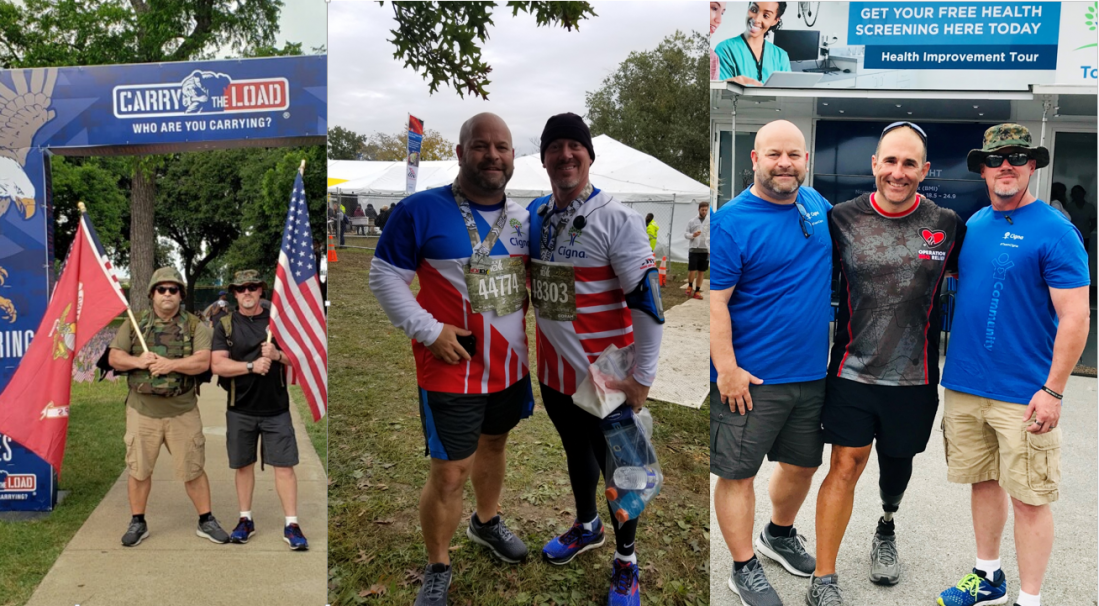 Ed Landry and Rick Peacor didn’t know each other until about two years ago, but they now share a strong friendship and a bond as former Marines and runners.

They met through Cigna’s Enterprise Resource Group (ERG) for veterans and started to swap stories. They discovered they had served in a lot of the same places at the same time, but had never met before. Now they’re training together for the MCM10K – for the second year in a row – as a member of Team Cigna. A Military Friendly® Employer, Cigna returns again as a presenting sponsor of Marine Corps Marathon Weekend.

Last year, Rick, an exercise specialist and physical activity coordinator with Cigna finished in under an hour. This year, he aims to hit a time that corresponds to his age – 50 years old. Ed, a customer service team leader as part of Cigna’s group disability insurance team, looks forward to sharing the race and his health journey with his father, daughter, and the Marines.

Ed says that the event has been life changing. He dropped 40 pounds during training last year, and hopes to lose another 15 to 20 pounds this year. His goal last year was just to finish the race and share the experience with his daughter. This year, he’s bringing both his daughter and his Dad, which will be very emotional because Ed’s mother passed in January the same day he was running the half marathon at Disney. Ed’s father is an 83-year-old former Marine, and a history buff who has never been to Washington, D.C. Ed says this will be a once in a lifetime experience for all of them.

Ed and Rick know that preparing for a run — or for anything else big in life — is easier when you have a community of supporters. Ed’s boss is a consummate athlete and checks in frequently with him about his training, while Rick’s wife keeps him focused.

And they always turn to each other for support, because that’s what friends do.

“Rick nudges me back on course. He makes me feel guilty sometimes if I skip a day of training when I just don’t feel like it,” Ed says.

Rick notes that he’s not trying to guilt Ed, just motivate him, which has a side benefit. “By pushing Ed, I’m also pushing myself to make sure I’m accountable for my own training.”

Rick says that endurance training is completely different from the strength training that’s his passion, so he appreciates Ed’s help. Each one helps the other stay on track.

Ed and Rick hope to spread that motivation even further by paying it forward to friends, family, colleagues, and other veterans. Because that’s what Marines do.

Cigna, a presenting sponsor of the Marine Corps Marathon Weekend, is a global health service company dedicated to improving the health, well-being and peace of mind of those the company serves. As a Military Friendly® Employer, Cigna encourages health and wellness and supports veterans nationwide through its offering of a National Veteran Support Line for veterans, their families, and caregivers. For more about Cigna’s work in the veteran community, please visit the Cigna website.