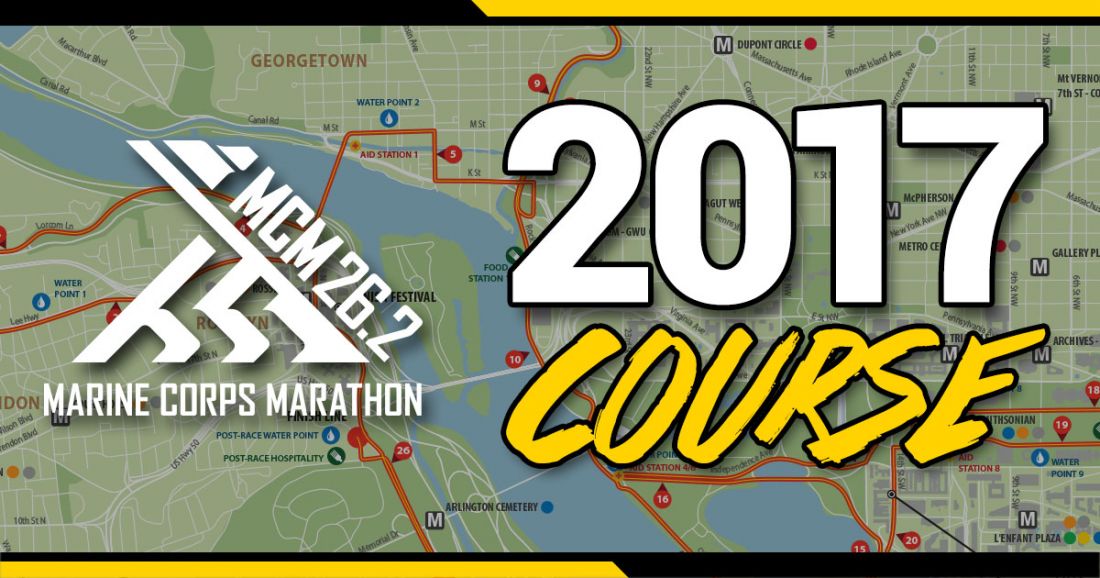 The 42nd Marine Corps Marathon will feature a course familiar to those that previously participated in the annual event hosted in Arlington, VA and the nation’s capital. After making a series of adjustments to the 26.2 mile course last year necessitated by the Metro system’s extensive SafeTrack repair program, the MCM will revert to a course utilized in 2015 that received favorable reviews from runners.

An early representation of the 2017 MCM course has been posted on the MCM website. The MCM10K course will also return to the hugely popular route that originated on the National Mall.

While the great majority of the course mileage conveys from year-to-year and encompasses the many landmarks that populate the nation’s capital, there are four noteworthy changes from last year’s course to the one that will be used on October 22, 2017.

1-Kirkwood Gone. A short out-and-back that offered just the right amount of needed mileage was affixed to the 2016 MCM course in the second mile along Kirkwood Road in Arlington. Say bye-bye to this short-lived addition in 2017.

2-More Rock Creek. In 2016, runners ran just three miles on Rock Creek and Potomac Parkway, one of the greener portions of the course. This year’s course will feature nearly five miles along this stretch, passing last year’s turnaround at Waterway Drive and reaching up to Calvert and Beach Streets. Runners will enter the National Park area in mile five and exit in mile nine.

3-Less Pentagon. The Pentagon parking lot offered found mileage in 2016 leading runners on a winding route in miles 21-22. The return of Rock Creek removes the need that prompted the addition of this portion of the course last year. Runners will cross the 14th Street Bridge and head directly to Crystal City instead of turning into the Pentagon lot.

4-New Connection. Previously, runners traversed the North/South Connector crossing the Pentagon Parking Lot in mile 24. Streamlining the run, the MCM will lead runners from Long Bridge Road to Boundary Channel for a run alongside the North Pentagon lot on the way to Route 110 and the Marine Corps War Memorial.