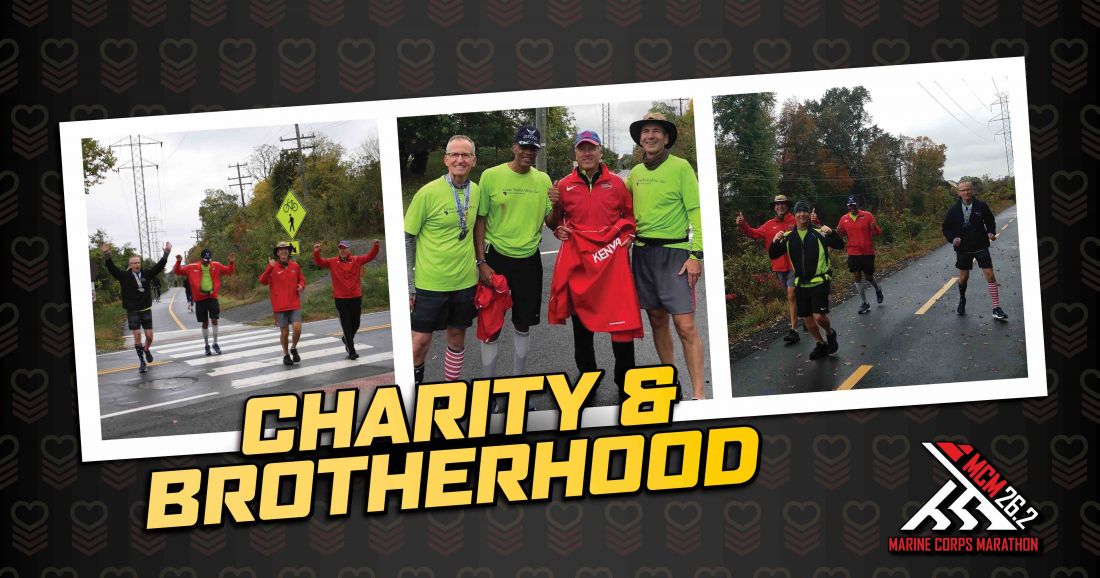 Garvin, the Executive Director of Cross World Africa (CWA), a non-profit charity that helps disenfranchised Kenyans break the cycle of poverty, teamed up with his Air Force Academy brothers from the Class of 1981 to raise funds and awareness for his organization.

While the team raised over $43,000 at the 2019 MCM, Garvin was more inspired by their ability to complete the 26.2-mile journey. After watching the CWA’s Team HERD cross the finish line, the 61-year-old made a pledge to get in the arena and run the next MCM with his band of brothers.

“In typical fashion, it was a team effort,” said Garvin. “Darren and Jack served as physical trainers, physical therapists and inspirational leaders during my training. It took a miracle for them to get me through the rigors of marathon training and then on race day, they turned over the reins to Tim to get me across the finish line.”

Garvin acknowledged that this year has been especially challenging for his friends and their families, and still they showed up for him and persevered.

For Dr. McKnight, it’s the least he can do for his friend. “I’m running this marathon because I believe it’s really important for all of us to think of something bigger than ourselves,” said McKnight, technical director at Centauri Corporation. “However, the more spiritual reason I am running is to support my Air Force Academy classmate, Eric who does nothing but give to others.”

In an interview with the Air Force Academy in 2018, Garvin said, “If you want to understand why I give, it’s because people have poured into me and now I just want to give back.”

Born and raised in Brooklyn, New York, Garvin lived in a poor neighborhood where he survived a series of family tragedies. His father shot and killed his grandmother, then shot and seriously injured his grandfather and his aunt. Sometime later, his mother was shot six times by a stranger pretending to sell children’s books and during her recovery turned to alcohol. As a result, the family’s financial situation grew worse and Garvin and his two brothers were split up to live with various relatives. But Garvin didn’t let his misfortunes dictate his future. He excelled at his new school in Staten Island, eventually being elected class president three straight years, serving as president of the school’s honor society and joining the track team. Garvin’s academic and extracurricular success led to recruiting interest from several prestigious colleges, including the Air Force Academy, where he met his classmates, squadronmates and lifelong friends Darren, Jack and Tim.

“I would not be running a marathon at this point in my life if it wasn’t for Eric,” said Hawes, a senior principle system engineer at Centauri Corporation. “He created an opportunity that was worthwhile and motivational for me to put my 60-year-old body through the pain of getting ready for a marathon and actually completing it.”

Echoing his sentiment, Berkebile, a captain for American Airlines shared, “Initially I signed up because I just wanted to run with my friends and in the process help a charity. But once I got into it, I realized it was truly a life changing experience to be helping people who really need help.”

The “brotherhood” successfully completed their virtual MCM on Sunday, October 25 at the Washington & Old Dominion Trail in Ashburn. McKnight and Berkebile completed the marathon with a time of 3:45:18, while Garvin and Hawes finished in 5:41:47.

“Tim’s a seasoned marathoner but he hung with me to make sure I finished the race,” said Garvin. “Despite being cold and exhausted, I finished thanks to my brothers who refused to forsake me, reinforcing our class motto, ‘81 Second to None.’”

The money raised will go towards completing projects meant to provide entrepreneurial and educational opportunities in Iten and Kisumu, Kenya. “What we do is give people an opportunity to break the cycle of poverty. Whether that’s giving them cows or goats, providing them with scholarships to high school or training them in a skill like seamstress or barber. All of those translate to them being able to be on their own two feet and be able to do something for their families.”