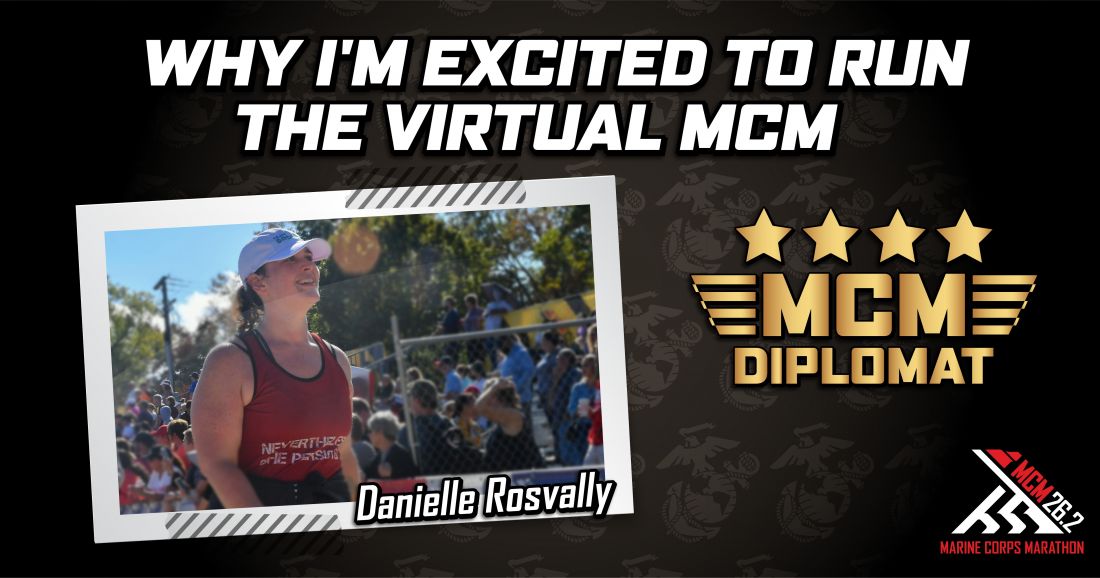 In the past week, I’ve been overjoyed to see that the Marine Corps Marathon (MCM) – one of my very favorite marathons and one I’ve run every year for the past four years – is going to be able to host an in-person event in 2021. This is an enormous win for the running community and an incredible celebration as we all hope to return safely to the sport that we love and the people we’ve missed.

But as I’ve been watching the announcements come out from folks excited to claim their in-person bibs and happily given advice about sundry race logistics like where to stay in DC and how to get to the start line, I’ve also been watching my own schedule with trepidation. A return to travel also means a return to certain elements of my job that, it seems, will keep me away from DC this year for the MCM.

While I’m extraordinarily disappointed that I won’t be able to line up with the other runners on October 31st, I can’t help but be grateful that I won’t be fully missing out on the marathon. In fact, I’ll be joining a whole other community of runners. This community is a community of resilience and strength. It’s comprised of folks who, for so many reasons, just can’t make the journey to DC this year – servicemen and women who will be running the MCM all over the world, families who need to prioritize home life over travel right now in the wake of a difficult year, folks who don’t feel safe enough to travel yet and people who (like me) have jobs that they simply can’t leave for a long weekend. There are as many reasons to run a virtual race as there are kinds of people, and I’m proud to join the ranks once more.

I know it can be disappointing to make the decision to run virtually when all you want to do is experience the rush of live racing (trust me, I’m there right now too). But I don’t think that running a virtual marathon is “settling.” I’ve run ten marathons, one of them virtual (MCM 2020), and I must say that the virtual marathon was the most challenging. Being in charge of my own one-man event – from managing my route and having no water support to getting no boost from a crowd of friendly onlookers – everything about running a virtual race is difficult. In addition to the monumental task of running 26.2 miles, suddenly you’re also a race director for a major event and must deal with the logistics of running it even while you’re in the deepest parts of marathon training.

Yes, virtual races are difficult. It’s hard to find the energy to keep going when you’re tired and hurting in the dark miles. It’s hard to find the courage within yourself to take just one more step when on a racecourse you’d have a funny sign to read or the sound of a cowbell to cheer you on. During a virtual race, you’re alone with your own thoughts and (all too often) your own demons. They emerge from darkened corners as you gut out the hardest miles of the race. They whisper lies to you like “you’re not strong enough” and “you should just stop running right now.” They can be convincing, these demons. In a live race, you have the opportunity to tune them out as you take in your surroundings, talk to another runner, listen to live on-course music, or just steep yourself in the atmosphere of the marathon. But during a virtual race with all of that stripped away, you have nothing to stand between you and the dark recesses of your own mind. It’s just you and your demons.

But the same elements that make a virtual marathon difficult make it worthwhile. One of MCM’s credos is “Always earned; Never given.” Battling your demons while out on a virtual run is the ultimate test; a crucible from which you can emerge and know, with certainty, that you are capable of doing difficult things. You are strong, you are powerful, you are unstoppable. Even when given the choice to quit, you kept going. In a virtual marathon, every step is a choice. Every moment is another moment you chose to do the hard thing. And that’s what makes the finish line even more sweet.

So, of course I can’t wait to be back in Arlington claiming my medal from a Marine. Of course I am looking forward to the next time I can party in Crystal City with perfect strangers while I stare down the final 10K of the race. Of course I can’t wait to storm the district. And of course I’ll be cheering on all of the runners who are able to make the incredible journey in October and wishing wistfully that I was one of them.

But, I’m also excited to run my race this year on my own course, in my own mind, and see how many of my demons I can fight while doing it. A virtual race isn’t just another run; it’s a challenge unlike anything else and a chance to walk through the fire and emerge victorious by sheer force of your own will. Train hard, everyone. Your demons are waiting and it’s high time you showed them who’s boss.

Danielle Rosvally is an MCMO four-star diplomat. She’s a runner, triathlete, and strength athlete, and is looking forward to becoming a member of the MCM Runner’s Club when she completes her fifth consecutive MCM in 2021. You can find her on Instagram: http://www.instagram.com/thedanibeast