Alina Romanowski – On Running with the U.S. Embassy Kuwait Team 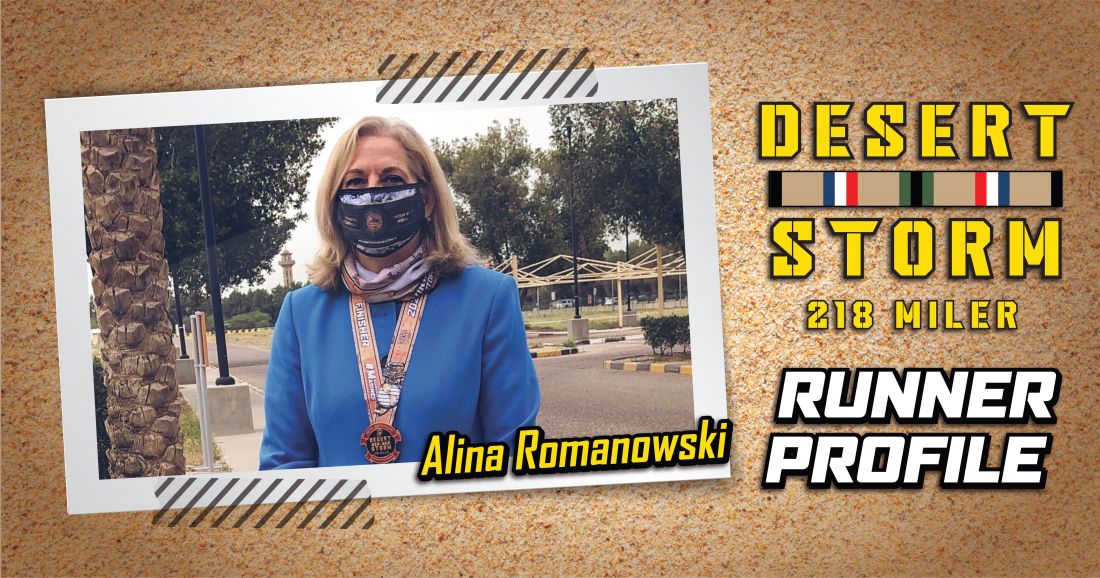 Alina Romanowski has been serving as the U.S. Ambassador to the State of Kuwait since last February. So, when the Marine Corps Marathon Organization announced the Desert Storm 218 Miler to commemorate the 30th anniversary of Operation Desert Storm, also known as the liberation of Kuwait, she jumped at the opportunity to participate and honor a significant moment in history.

“As the U.S. Ambassador to Kuwait serving in Kuwait 30 years after the liberation, I wanted to do my part to celebrate what the Marines accomplished in Desert Storm and honor those who have fallen,” said Romanowski. “This run allowed the Embassy team to recreate the feeling of the approximate distance the Marines covered upon arrival between the main airport in Al Jubail, Saudi Arabia, to the middle of Kuwait City.”

Alison Basinger, team captain and MCM Runners Club member added, “As a teacher and personal trainer, my focus during the pandemic has been maintaining a sense of community and physical and mental health. Right now, our team is genuinely enjoying celebrating Hala February with this 30th anniversary race. We all contributed to our end goal and felt a sense of accomplishment.”

Since 1999, Kuwait has been observing Hala February to celebrate the coming of spring, Arab culture and highlight National Day on February 25th and Liberation Day on February 26th. Ambassador Romanowski and her team have the honor and privilege of celebrating these historic moments with Kuwaitis.

“It’s a reminder of a victory story of a resilient and determined Kuwaiti people committed to liberating their country and a narrative of how the U.S. resisted [the] brutal aggression and pulled off a modern-day miracle by assembling an unprecedented coalition force to right a terrible wrong,” said Romanowski.

An avid runner for the last 40 years, Ambassador Romanowski encourages her team to be physically active through leading by example. “I’m promoting fitness within the Embassy community just by doing it myself and encouraging others to join me or pursue their own favorite exercise activity.”

She added, “Especially now, staying healthy and fit are important ways to help keep your spirits and stay engaged.”

The Ambassador is part of Team U.S. Embassy Kuwait, a 20-member team consisting of participants of various ages and walks of life, including kids, first-time runners and participants who walked instead of run. With the current pandemic and social distancing still in place, it all comes down to just being a team and being able to do this together.

“One benefit of running as a team was that there are always a mix of runners and everyone feels they can contribute to the overall success of the team regardless of how many miles they run,” added Ambassador Romanowski. “We were all dedicated to doing our part in racking up the miles and we did it. I hope everyone has had lots of fun and renewed their commitment to exercising and staying healthy, especially during the COVID pandemic.”

The U.S Embassy Kuwait team has completed over 600 miles already. “While we may not have ran the most miles overall, we finished here in Kuwait first,” Ambassador Romanowski.