​Michelle Craft – Running for My Dad 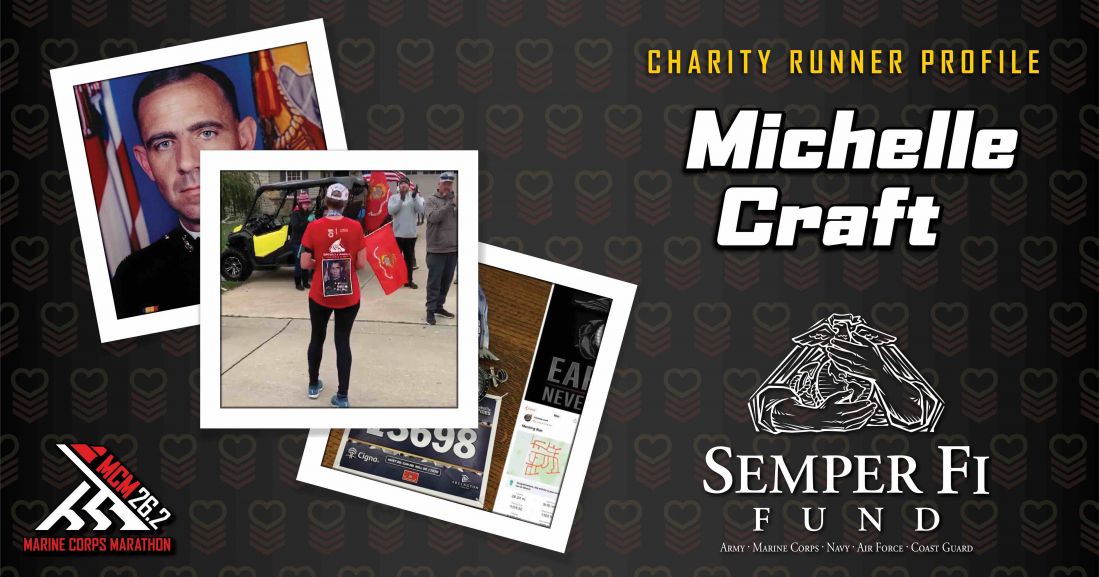 In 2019, Michelle Craft and her father Marine Major Bret Schomaker (Ret.) decided to run the 2020 Marine Corps Marathon (MCM) together.

“We started to game plan how to join the 2020 MCM, either gamble with the lottery or join the Semper Fi Team,” said Craft. “We never came to an agreement before my dad suffered a heart attack and suddenly passed on January 22, 2020. His passing directed me to join the Semper Fi & America’s Fund team in his honor.”

As a proud Marine daughter, Craft watched her dad complete his physical training each day and participate in community runs and other events, something he found rewarding because of the sense of community and team spirit it provided. But for Craft, team sports were more a natural environment for her younger siblings than for her.

“When my dad was in Operations Desert Shield and Storm, he wrote a letter to my mom with a comment of how team sports were not my thing and how at the young age of 10 he knew I would be a good runner,” shared Craft, who said she only learned of the letter earlier this year after his passing.

However, Craft didn’t start her running journey until 2012 when she headed out the door for her usual daily walk and instead decided to run—first to the stop sign, then to the end of the street, then the next stop sign and so on until she had run two miles.

“I won’t say after those initial two miles of running that it came naturally to me,” said Craft. “To this very day running is a love/hate relationship, but the reward far exceeds the time spent pounding the pavement.”

Since then, she’s completed several 5Ks and 10Ks, at least 15 half marathons and one full marathon. The virtual 2020 MCM was her first MCM and second marathon.

“My Dad supported the Semper Fi Fund over the years, so our family asked for donations to be made in his name in lieu of flowers at his funeral service,” said Craft. “At first, the fundraising goal set was the $600 to ensure entry into the 2020 MCM. That goal was met quickly so I upped the goal to $1,000 and to date, we’ve raised $2,846.”

Choosing to complete the Marathon on the original date of Sunday, October 25, Craft shared that it was a mix of emotions leading up to the day. “Texts and phone calls came in Saturday wishing me luck, telling me how proud my dad is of me, etc. That was rough, really rough,” she said. “This was something we were supposed to do together and this was also to be our first vacation with my dad and my boys.”

After pinning her father’s photo on the back of her shirt and donning his 2010 MCM hat, Craft set out to run the familiar streets of her old neighborhood where with the help of her family and friends, they had placed several United States Marine Corps flags and set up a few water stations. She was joined by various family members and friends along the way and even escorted by the local police and fire departments.

She knew she was approaching the finish line when she saw the large group ahead and heard Hard Corps by The Warrior Song. “It was then that the emotions fully caught me and I grinned the biggest smile knowing I had done my Dad well; made him proud. My Dad guided me through a strong solid run.”

Craft completed the MCM in 4:04:32, shaving 65 minutes off her first marathon time in 2014 and setting a new personal record. Her husband presented her with her medal, as well as a second one for her dad sent by an old neighbor from their days on Camp Pendleton and a fellow Semper Fi supporter, which will be placed in a shadow box with his 2010 MCM hat.

Craft and her husband will be running the MCM10K next, while she and her siblings get ready for the virtual Desert Storm 218-Miler.

“We had just transferred to Camp Pendleton in the summer of 1990 and our Dad was Company Commander with 1st Battalion 5th Marines,” shared Craft. “His Battalion was some of the first ground troops deployed, so we are looking forward to this event and honoring those men and women who fought for our country in Operations Desert Shield and Storm.”