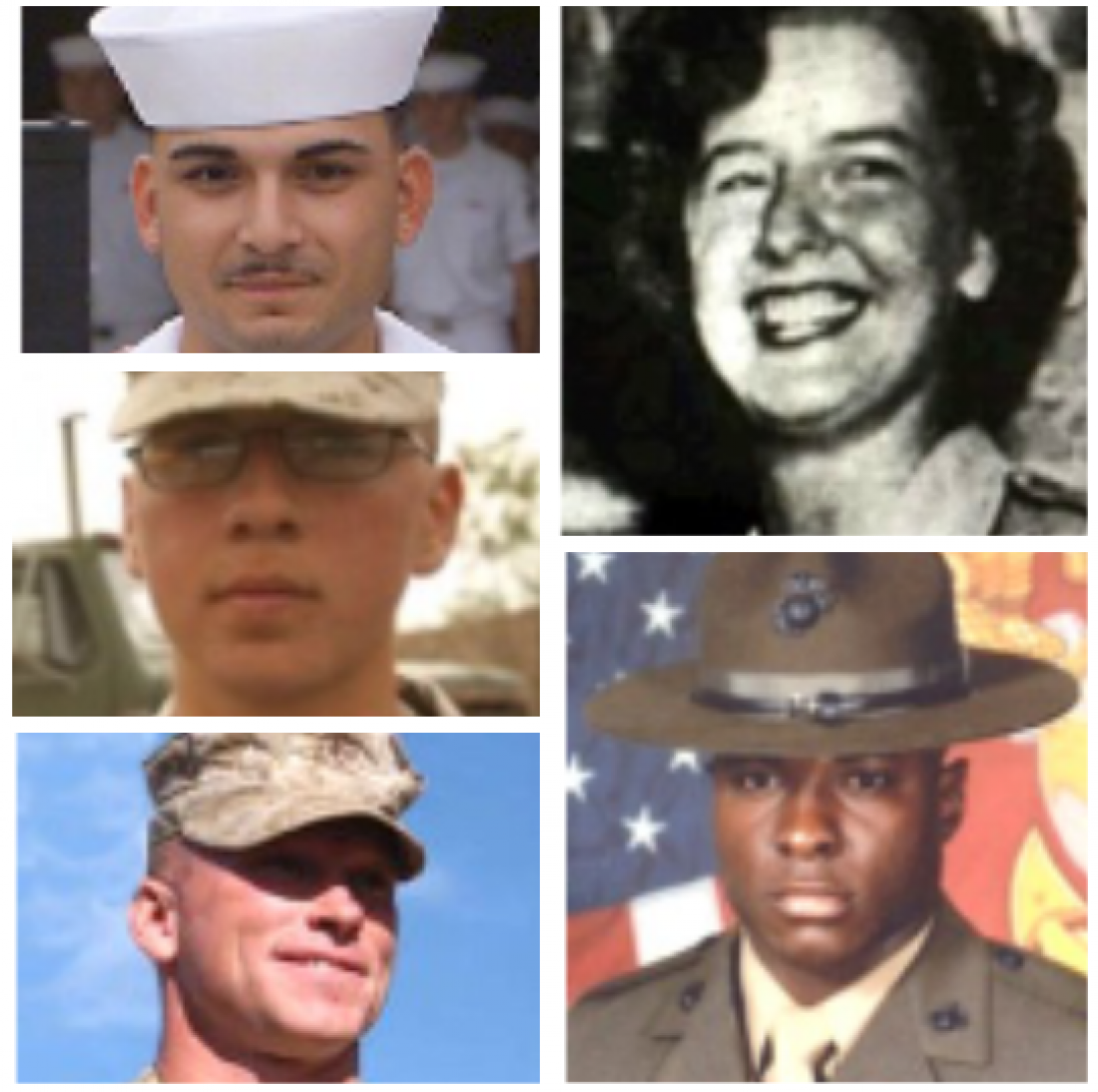 “The People’s Marathon” has provided thousands of people the opportunity to test their mental and physical endurance over its 46-year history. The 26.2 mile long journey goes through many of Washington D.C.’s most famous landmarks and monuments as well as the moving Blue Mile, encouraging participants to reflect and remember the people that helped build and defend our great nation. The Marine Corps Marathon challenges, inspires, and provides an unforgettable experience.

Grant Thornton is proud to continue our sponsorship of the Marine Corps Marathon. We too are running with purpose: to share the stories of a few individuals whose contributions are worth knowing. Their acts of bravery, selflessness, and heroism gives us strength and motivates us to finish our mission.

Name: Brian Chontosh, USMC
Award: Navy Cross
Award Info: The Navy Cross is the second-highest military medal awarded to Sailors or Marines who distinguish themselves for extraordinary heroism in combat with an armed enemy force.

Citation: On March 25th, 2003 while in support of Operation Iraqi Freedom.First Lieutenant Chontosh led his platoon north on Highway I toward Ad Diwaniyah into a coordinated ambush of mortars, rocket propelled grenades, and automatic weapons fire. With coalition tanks blocking the road ahead, he realized his platoon was caught in a kill zone. He had his driver move the vehicle through a breach along his flank, where he was immediately taken under fire from an entrenched machine gun. Without hesitation, First Lieutenant Chontosh ordered the driver to advance directly at the enemy position enabling his .50 caliber machine gunner to silence the enemy. He then directed his driver into the enemy trench, where he exited his vehicle and began to clear the trench with an M16A2 service rifle and 9mm pistol. His ammunition depleted, First Lieutenant Chontosh, with complete disregard for his safety, twice picked up discarded enemy rifles and continued his ferocious attack. When a Marine following him found an enemy rocket propelled grenade launcher, First Lieutenant Chontosh used it to destroy yet another group of enemy soldiers. When his audacious attack ended, he had cleared over 200 meters of the enemy trench, killing more than 20 enemy soldiers and wounding several others. It was an outstanding display of decisive leadership, unlimited courage in the face of heavy enemy fire, and the utmost devotion to duty.

Running in honor of Brian Chontosh is Thornton Ray. Thornton is a Senior Associate in Grant Thornton’s Public Sector, he participates in the Veterans and Allies Business Resource Group and is an Army Veteran.

Name: Moses Cardenas, USMC
Award: Silver Star
Award Info: The Silver Star is the third-highest military medal for valor in combat. It is primarily awarded to members of the U.S. Armed Forces for gallantry in action against an enemy of the United States.

Citation: On August 2nd, 2007 while in support of Operation Iraqi Freedom, Lance Corporal Moses Cardenas was conducting a combat patrol when his platoon was attacked by heavy automatic fire, a suicide bomber, and rocket propelled grenades after stopping two suspicious trucks. During the initial stage of the fight, a Marine fell wounded in the open between the opposing forces. Realizing that the bulk of friendly weapons were masked, Lance Corporal Cardenas left his safe position behind a vehicle and fought his way across 50 meters of fire-swept, open desert against five armed insurgents to rescue the fallen Marine. After sustaining a gunshot wound to the neck that knocked him to the ground, Lance Corporal Cardenas tenaciously rose to his feet, calmly reloaded his squad automatic weapon, and continued his assault until he reached the wounded Marine. With rounds impacting around him, Lance Corporal Cardenas alternated between pulling the wounded Marine and shooting bursts of controlled automatic fire at the enemy. After pulling the wounded Marine 100meters, he continued suppressive fire while rendering first aid until medical personnel arrived to tend to the wounds of both Marines. Throughout this close and fierce fight, he ignored his own severe wounds, remained fixed on his task, and saved the life of a fellow Marine.

Running in honor of Moses Cardenas is Tina Cooper. Tina is a Senior Manager in Grant Thornton’s Public Sector and she has led Grant Thornton’s sponsorship of the Marine Corps Marathon since 2014.

Name: Luis Fonseca, USN
Award: Navy Cross
Award Info: The Navy Cross is the second-highest military medal awarded to Sailors or Marines who distinguish themselves for extraordinary heroism in combat with an armed enemy force.

Citation: On March 23rd, 2003 while in Support of Operation Iraqi Freedom, Hospitalman Apprentice Luis Fonseca was a member of Company C whose mission was to assault and seize the Saddam Canal Bridge. During the assault an amphibious assault vehicle was struck by a rocket-propelled grenade inflicting five casualties. Without concern for his own safety, Hospitalman Apprentice Fonseca braved small arms, machine gun, and intense rocket propelled grenade fire to evacuate the wounded Marines from the burning amphibious assault vehicle and tend to their wounds. He established a casualty collection point inside the unit's medical evacuation amphibious assault vehicle, calmly and methodically stabilizing two casualties with lower limb amputations by applying tourniquets and administering morphine. He continued to treat and care for the wounded awaiting evacuation until his vehicle was rendered immobile by enemy direct and indirect fire. Under a wall of enemy machine gun fire, he directed the movement of four casualties from the damaged vehicle by organizing litter teams from available Marines. He personally carried one critically wounded Marine over open ground to another vehicle. Following a deadly artillery barrage, Hospitalman Apprentice Fonseca again exposed himself to enemy fire to treat Marines wounded along the perimeter. Returning to the casualty evacuation amphibious assault vehicle, he accompanied his casualties South through the city to a Battalion Aid Station. After briefing medical personnel on the status of his patients, Hospitalman Apprentice Fonseca returned North through the city to Company C's lines and to his fellow Marines that had been wounded in his absence. His timely and effective care undoubtedly saved the lives of numerous casualties.

Running in honor of Luis Fonseca is Steven Harris. Steven is a Senior Associate in Grant Thornton’s Public Sector supporting the Department of Veterans’ Affairs since 2017. He is an active member of GT’s Running and Biking Club.

Name: Aubrey McDade, USMC
Award: Navy Cross
Award Info: The Navy Cross is the second-highest military medal awarded to Sailors or Marines who distinguish themselves for extraordinary heroism in combat with an armed enemy force.

Citation: On November 11th, 2004, in support of Operation Iraqi Freedom, shortly after departing a platoon firm base and proceeding south toward Phase Line Grace, 1st Platoon entered an alley and encountered an immediate heavy volume of small arms and machine gun fire. In the opening seconds of the engagement, three Marines were seriously wounded as the well positioned and expecting enemy pinned others down. On contact, Sergeant McDade rushed from the rear of the platoon column toward the kill zone and immediately deployed a machine gun team into the alley to provide suppressive fire on the enemy. After several attempts to reach casualties in the alley were met with heavy, well-aimed machine gun fire, he showed total disregard for his own safety by moving across the alley and successfully extracting the rest of three wounded Marines from the kill zone. Aware of the fact that there were still two wounded Marines in the alley, Sergeant McDade dashed through the heart of the kill zone two more times, each time braving intense enemy fire to successfully retrieve a Marine. After extracting the last casualty from the kill zone, he assisted in the treatment and medical evacuation to these Marines. His quick thinking and aggressive actions were crucial in saving the lives of two of the three casualties.

Running in honor of Aubrey McDade is Karen Liu. Karen is a Senior Associate in Grant Thornton’s Public Sector, she participates in the Veterans and Allies Business Resource Group and is a member of the Running Club.

Name: Barbara Barnwell, USMC
Award: Navy and Marine Corps Medal
Award Info: The Navy and Marine Corps Medal is the highest non-combat decoration awarded for heroism by the Department of the Navy to Marines and Sailors. The award hinges on the actual level of personal "life threatening" risk experienced by the awardee. For heroic performance to rise to this level it must be clearly established that the act involved very specific life-threatening risk to the awardee

Citation: On June 7th, 1952 at Camp Lejeune, NC during the Korean War, Sergeant Barnwell, while swimming 100 to 150 yards offshore, heard cries for help from a male enlisted Marine who was struggling in the heavy surf fifty feet from her. Without a thought for her own safety, Sergeant Barnwell quickly swam to the near-hysterical man and managed to secure a hold on him despite the fact that he fought and scratched her and pulled her under water several times. Although both their lives were endangered by the man's struggling and the severe undertow, Sergeant Barnwell courageously swam with the man in tow to shallow water where she was met by a lifeguard. Between the two of them the man was brought to the beach where artificial respiration was administered to the unconscious man. Sergeant Barnwell modestly left the scene without learning the identity of the man she had rescued.

Running in honor of Barbara Barnwell is Maria Maxwell. Maria is a Manager in Grant Thornton’s Public Sector, she participates in the Veterans and Allies Business Resource Group and is a Marine Corps spouse.