The Marine Corps Marathon (MCM) is a Gold Level Certified Event by the Council for Responsible Sport. This award is in recognition for our continued commitment to being socially and environmentally responsible as a world-class running event. This is the MCM’s second gold certification from the Council and is currently the second largest U.S marathon to earn this distinction among environmentally-conscious sporting events.

Previously, the MCM was awarded Silver level certification in 2009 and again in 2011, and first earned gold in 2014.

The MCM earned credit for both meeting and exceeding standards in all five categories of the certification framework: (1) effective planning and communications; (2) aligning procurement of products and services with partners that account for and mitigate their environmental impacts; (3) resource management; (4) efforts to increase accessibility and inclusion for under-represented community groups; and (5) for ongoing efforts toward building a positive legacy in the broader community.

In conjunction with Arlington County’s Solid Waste Bureau, nearly 2,550 pounds of banana and orange peels were collected from runners for composting, along with compostable cups used at water stations for the first time, while 9 tons of plastic jugs and cardboard boxes were recycled. MCM sponsor Fyffes provided special yellow composting bins to collect materials throughout the Finish area.

Additionally, the MCM and its partners collected 4,000 pounds of clothing that were cleaned and donated to local Arlington and Washington, DC-area shelters following the Marathon. The MCMO also worked closely with AMVETS, a service organization, to collect gently used shoes during the Expo, an initiative that supported sustainability and military veterans. In total, 244 pairs of shoes were collected over two days.

A Greening Wall was also displayed during the Health & Fitness Expo to educate runners on the MCM’s sustainability efforts, including all the ways they can help.

As a result of the comprehensive waste reduction system implemented in 2019, 54.4% of the waste generated over the three-day weekend was diverted out of landfills. 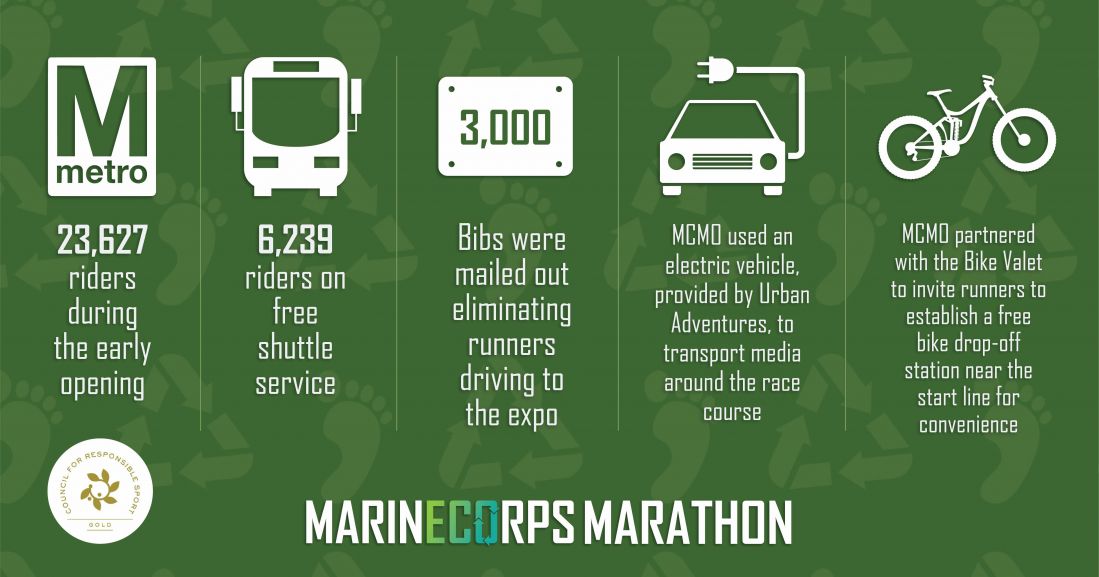 MCMO partnered with the Washington Metro Transit Authority to provide runners with an early opening to arrive on time to the race start and encouraged all participants and spectators to take advantage of the free shuttles to reduce the carbon footprint. Free roundtrip shuttles ran from Eisenhower (Yellow) and Van Dorn (Blue) Metro station to the Gaylord National Resort during the Expo hours and on Saturday morning for the Kids Run. They also ran on Sunday morning from Crystal City to the Pentagon. Shuttles are wheelchair and stroller accessible.

To reduce the dependency on paper, all registrations and communications to runners are electronic. Runners were also encouraged to download the e-Confirmation Card and display it at Packet Pick-up on a phone, while 3,000 bibs were mailed out to runners prior to the Expo.

Additionally, the MCMO partnered with Two Wheel Valet to provide a free bike drop-off station near the MCM start line for runners’ convenience. Two Wheel Valet is a green company that uses recyclable bike seat covers and an app to virtually check participants in and assign everyone a bike rack number to eliminate paper waste. 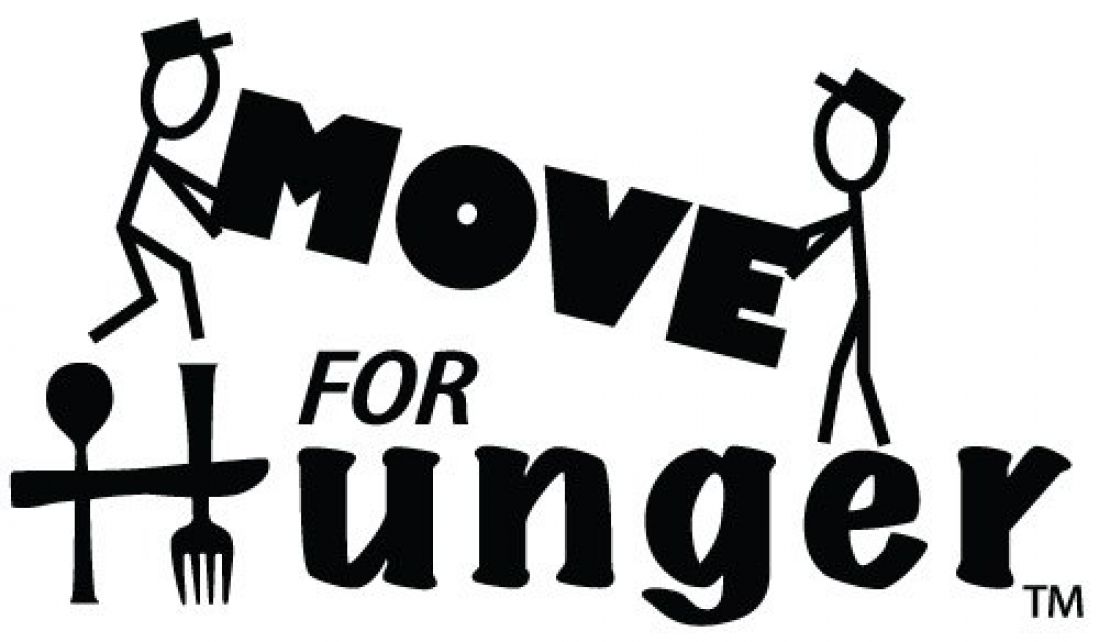 More than 5,000 pounds of unused perishable food was collected through the nonprofit organization, Move for Hunger, and donated to the Capital Foodbank.

Move For Hunger also gathered unused perishable food items at the Health & Fitness Expo. Move For Hunger is a national non-profit organization that has created a sustainable way to reduce food waste and fight hunger by mobilizing leaders of the moving, relocation and multi-family industries to provide their customers, clients and residents with the opportunity to donate their food when they move.

In support of National Park Service regulations, and to cut down on water-pollution, MCM organizers decided to place cup-less water stations, known as Water Monsters, at select locations on the course. This 125 gallon dispenser offered multiple spigots for runners to fill personal water bottles. Cups were not dispensed at this location. Adding this self-serve water station supports MCM green initiatives and helps runners through a stretch of the course that had previously been without water from mile marker 19 to just in front of mile 22 and through the portion of the MCM50K course addition. Using Water Monster reduces the environmental footprint of the water distribution operations by eliminating water jugs and cups. Additionally, Arlington County installed two water stations in the Finish Festival on the corners of Meade Street/Arlington Blvd. and Fort Myer Drive/Wilson Blvd. making it convenient for runners to refill water bottles.

The MCM annually recruits dedicated volunteer groups for the ‘Adopt-a-Mile’ program. This volunteer assignment includes augmenting clean-up efforts along the Marathon course. Groups provide a minimum of 18 volunteers (minimum age of 10) to clean the grass and roadways of any event-generated debris along an assigned mile of the MCM course. Each group participating in the Adopt-a-Mile program receives a monetary stipend for their support of the runners and U.S. Marines.

A contingent of the Adopt-a-Mile ensures that none of the event-generated debris on Rock Creek Parkway, miles six through nine, contaminates the water of Rock Creek, a stream that runs along the course. 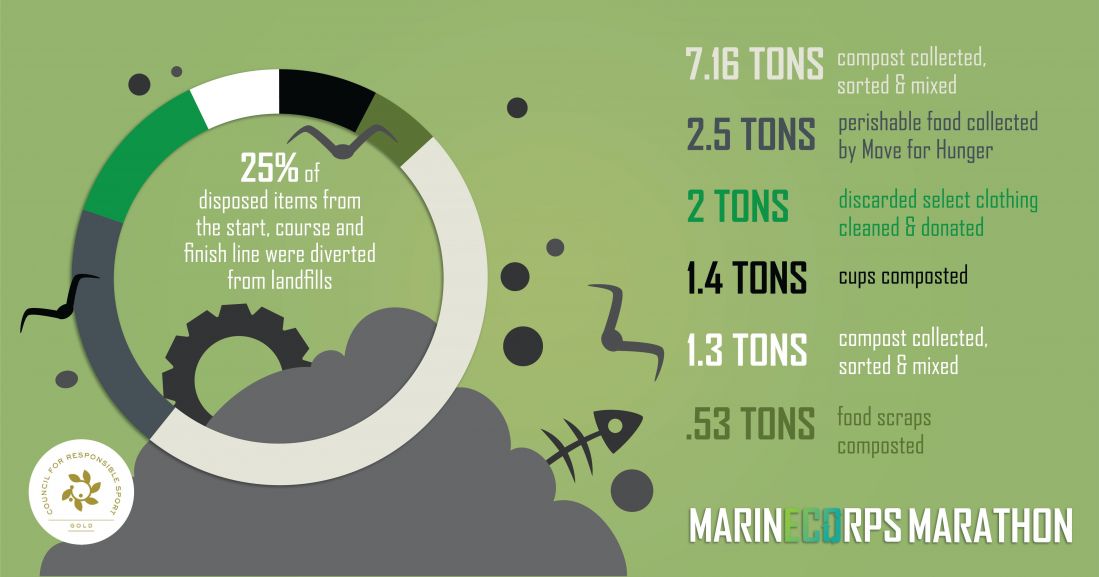 In partnership with Fyffes, the MCM offers composting receptacles in the MCM Finish Festival located in Rosslyn, VA. Additionally, the MCM presents finishers with a reusable recovery jacket, greatly reducing the amount of trash generated by other forms of post-run wraps.

ClearStream recycling containers are placed throughout the Finish Festival in Rosslyn to recycle bottles provided to runners at hospitality.

Further, the MCMO proudly supports the reseeding of the grounds of the Marine Corps War Memorial by funding this effort annually.

The Council for Responsible Sport announced that the Marine Corps Marathon was an early signatory to the United Nations Framework Convention on Climate Change (UNFCCC) “Sports for Climate Action Initiative.”

The “Sports for Climate Action Initiative” invites sport event hosts to declare their recognition of “the critical need for cities, regions, companies and investors from around the globe to help implement the Paris Climate Agreement and accelerate the transformative change needed to reach greenhouse gas (GHG) emission neutrality in the second half of the twenty-first century.” It offers five principles to guide forward action that leverages the global popularity of sport to help make a real difference in the battle against climate change, as well as help minimize the environmental footprint of sporting.