Runners Club Member "Disco" has a Ball at MCM 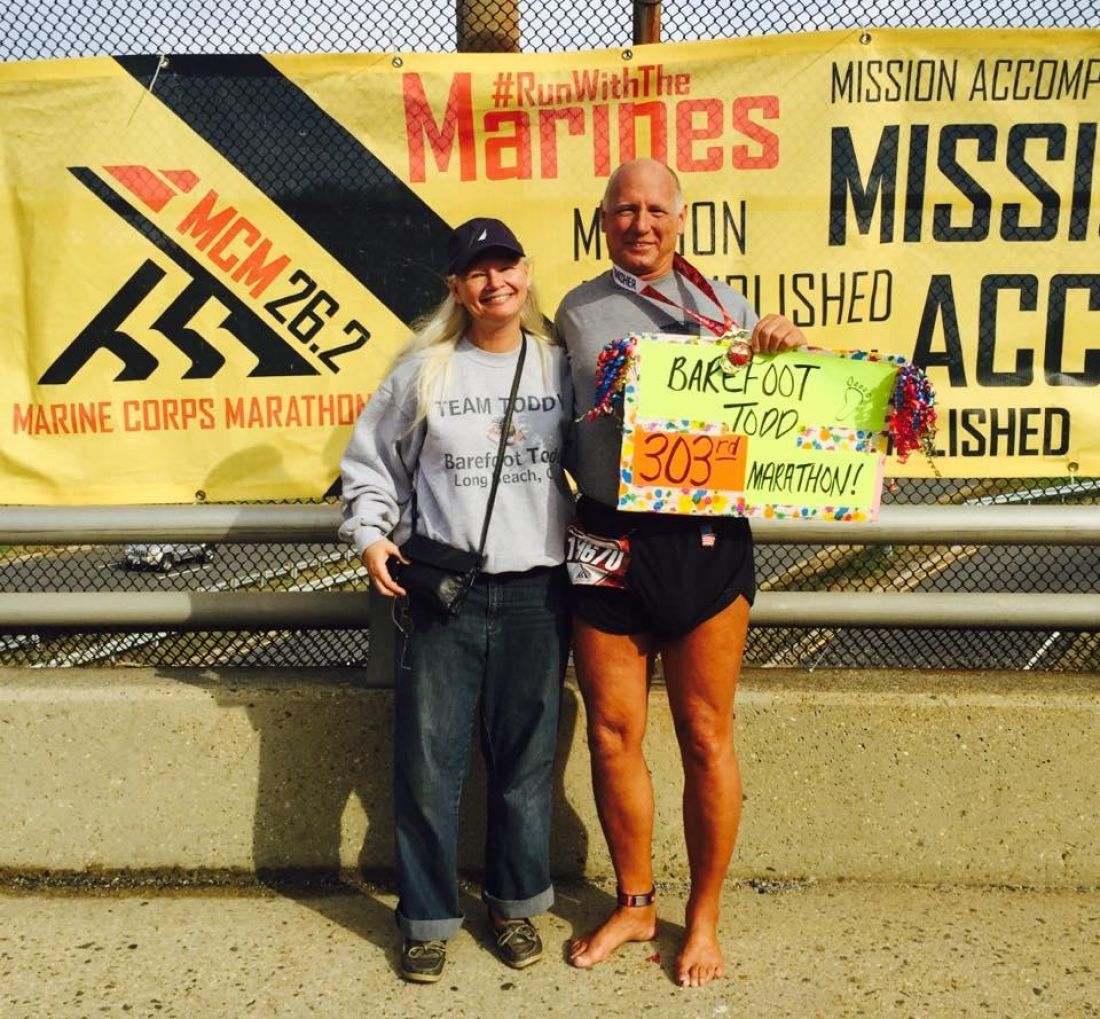 “Disco” will register for his 20th Marine Corps Marathon on March 1 with other members of the MCM Runners Club.

“I meant to do my first marathon, I trained and everything,” he says.“I didn’t mean to do another one.”

Byers grew up in Berkley Springs, WV, with his twin sister, Tina.He graduated from WVU with a degree in Aerospace Engineering, moved to Seattle after graduation and took a job in the industry.The young man was new to the area and did not know anyone so he took up running because it was something he could do on his own, rather than “sitting on the couch watching MASH.”

After completing his first marathon, Byers fell in love with a feeling.

“I liked the environment, the people, the accomplishment, the thrill of victory,” he said.“Now, I run marathons for what I see in other people. When you run for a crowd, that thrill is magnified.You can feel it.It’s palpable.”

Byers motivated by homesickness and a desire to be with “the good twin” back in Berkley Springs, sought out a “hometown” marathon. The search ended with Byers registered for his first Marine Corps Marathon in 1998.

“Since I’d moved to the west coast I didn’t get to see Tina very much, especially after our parents died.She supported me all those years, coming to see me run, and I wanted to do a local marathon,” Byers said. “I was able to combine my first MCM with a trip to see my sister.”

Byers found an interesting way to cover the cost for his trip back to the east coast – forget running shoes and just go barefoot.

“I have to find money to pay for the marathon somehow,” he laughed.

Byers was so impressed with the MCM that he has continued to participate in the event missing only once in 20 years.

“Anytime someone is going to do a marathon, either one-and-done or looking to expand, I tell them to do the Marine Corps Marathon because of the camaraderie and support,” Byers says. “If you’re going to do one, you can’t beat this event.”

The inspiration he felt has allowed Byers to now train others to complete the MCM.

“I train some people for their first marathon, of course encouraging them to run the MCM,” Byers says. “One year, one of those I coached passed me along the course.Apparently, I’m a good coach…”

Byers admits that he has slowed down along the way, joking that his coworkers call him Disco “because I’m that old.”

A slower pace allows him to enjoy the finer things along the MCM course, like seeing Tina cheering for him at the bridge.

“She’s always there to support me wearing her 'Barefoot Todd' sweatshirt, no matter how warm it is,” said Byers. “I always tell people I need something new to do like macramé or something.”

Disco and the other members of the MCM Runners Club will enjoy the well-deserved guaranteed access to MCM registration from March 1-14. Membership in the MCM Runners Club is available to individuals who have completed five or more MCMs and must be secured annually by February to be eligible for the current year.