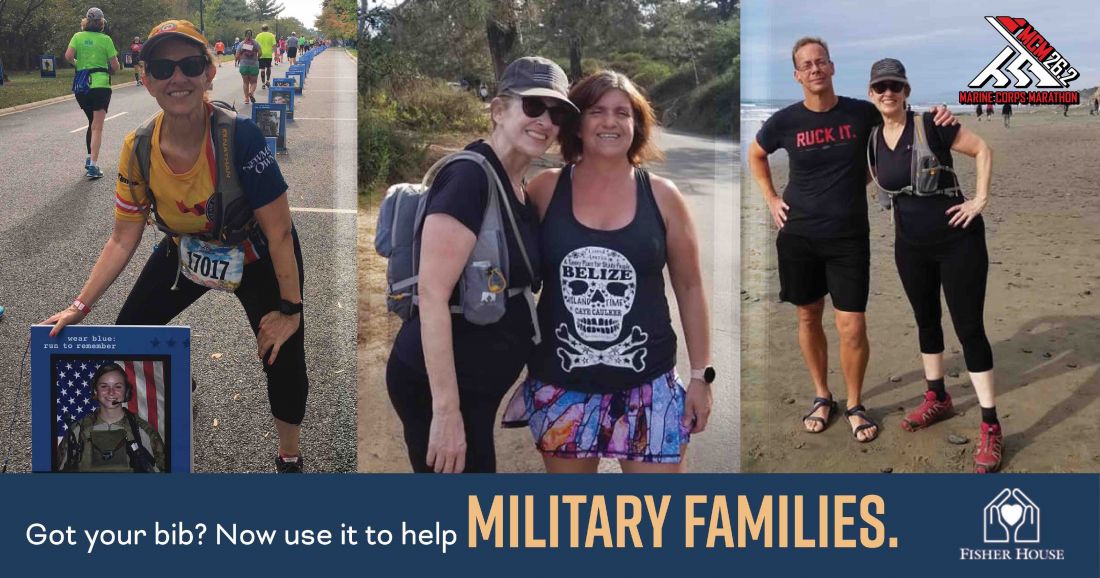 Marine Corps Marathon (MCM) veteran and former Fisher House fundraiser Jamie Gold ran the race in 2016, but she had to ramp herself up for training. She found that fundraising helped her commit to the run.

“I felt that the training was going to be so challenging for me and take so much mental endurance as well as physical endurance that if I did it as a fundraiser, it would just provide that extra motivation when my body started to ache and I didn't want to get out of the house in the morning to do a training run,” Gold, the author of Wellness by Design (Tiller Press, 2020) said.

She acknowledges that MCM runners today have their own challenges as the event shifted to a virtual status to prevent the spread of COVID-19.

“If I were training today, I'd be heartbroken,” she said.

But she has advice from her own training on how runners can keep themselves going—look at your WHY.

“Look at your ‘Why.’ I think that is really important. Everyone has their own. Why they're training, why they're putting their bodies through it, why they're taking the time away from their family or other passions, why they're getting up off the couch.”

For Jamie, that “why” was fundraising for a good cause and she decided that she wanted to focus on a highly rated veterans nonprofit, Fisher House Foundation.

“[Fisher House’s] mission ties in with two of my passions: veterans’ causes and military families, which I got interested in as a kid when our troops were coming home from Vietnam but they weren’t being treated very well, and that just inspired my young activist heart. Since then I volunteered and have done donations to just a range of different military veteran charities.”

Jamie originally started running in 2013 in an obstacle course run but built herself up to half marathons and in 2016, she completed the MCM.

“I started running and training then realized that training and fueling were much more interesting and motivating to me than dieting and exercise ever were.”

The motivation, from training or from fundraising, was important to Jamie as the training got tough and she suffered an injury.

“I had an overuse injury when I got to the later stages of training. I was right around probably 16, 17-mile training runs, and a muscle I never knew I had called a ‘popliteus muscle’ behind my right knee, started to give out,” Jamie said. “And it meant I could barely do the walks for that distance, much less run. I did not want to drop out since once I set a goal, I'm pretty hell bent on completing it. That's what keeps me going. And I used an extreme form of physical therapy to keep going.”

That injury took a toll, but she still completed the run. As she says, though, her fundraising was more elite than her running.

“And I have to say that my fundraising results were much more impressive than my finishing time,” she said. “And I'm okay with that. My goal was to finish, not breaking any records, but I was just as proud of raising $2,000 for a cause I feel is so worthwhile and to listen to Kyle Carpenter's parents talk about their Fisher house experience – it just reminded me of why I chose to be a Fisher House fundraiser.”

The $2,000 that Jamie raised was enough to provide up to 200 nights of free lodging to military and veteran families.

Fisher Houses around the world are a home away from home for military and veteran families while a loved one is undergoing care at a military or Department of Veterans Affairs medical center. The comfort homes, travel services, scholarships, and more programs of Fisher House Foundation have saved military families over $500 million since 1990.