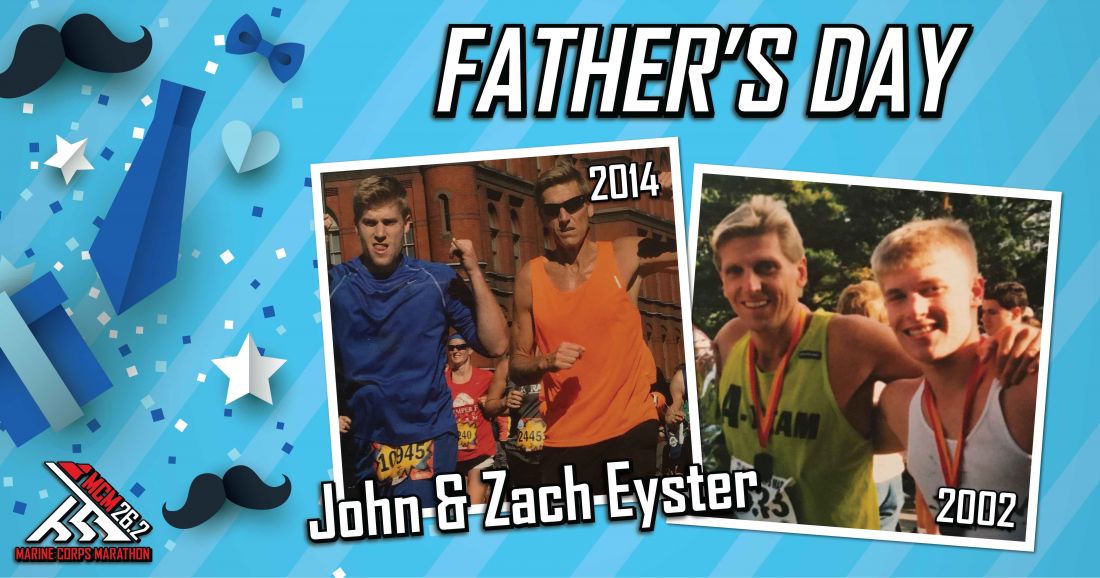 John Eyster was always into sports, playing basketball, softball and anything else that would satisfy his competitive nature. So, in 1994 when a co-worker asked if he would run a marathon with him, he jumped at the chance even though he wasn’t a runner. Neither of them got in to the originally targeted marathon through that event's lottery, so they turned their attention to the Marine Corps Marathon (MCM).

“It turns out it was the best thing to ever happen,” said Eyster. “It was also Oprah’s first marathon. The weather was horrendous, but we finished and knew we were coming back again and again. By the way, Oprah beat me and to this day my friends will never let me forget it.”

That first marathon was just the beginning. Since then, Eyster has been running marathons, ultra-marathons and 50-milers. It also inspired his son to start running and turned into a bond between father and son.

“When dad ran his first MCM in 1994 and got hooked, I knew eventually I would do that race with him,” said Zach Eyster. “I wanted to do whatever he was doing.”

Now, the father-son duo credits their close relationship to all the time they have spent running and the countless hours training together for each marathon.

“Zach was never competitive like me,” said John Eyster. “This was a sport we could do together and only compete against ourselves.”

In 2002, a 17-year-old Zach signed up for his first MCM with his father. It was the year of the D.C. sniper – who was arrested only days before the event – and a year after the 9/11 attacks.

“Everything about my first MCM was really special,” noted Zach Eyster. “Gathering together in a huge group to celebrate our country, our families, our health and our service members really meant something in that moment. It felt like it was really important that the race went off in Washington, D.C. as a statement of what we valued in each other.”

“That first one together certainly stands out because Zach was so nervous,” added his father. “Crossing the finish line, the emotion could only be described by the tears in our eyes. I was so proud of him, of how hard he worked and how much he wanted to do this with me.”

Over the next five years, between Zach’s senior year in high school and all through his college years, father and son made it a point to run the MCM together. It was their way of staying connected during a time when many parents and their children would sometimes drift apart. With a demanding job, it was eight years later before the duo ran their next MCM.

“In 2014, we made it a point to reconnect with the marathon and prioritize the important stuff,” said Zach Eyster. “It has never been about personal records or running fast [for me]. More than anything, running is about good company and slowing things down. Whenever my dad comes to visit, we always set aside time for a long run together.”

“And this year, we are doing the same thing,” he added. “This MCM is a celebration of dad’s return to form at 60-years-old and I am thrilled to be there with him.”

The two hope to participate in the 45th anniversary of “The People’s Marathon” on Sunday, October 25, 2020. It will be their first marathon since John suffered knee injuries two years ago.

“My doctor was not optimistic that I would run again,” said John Eyster. “After six weeks on crutches and four months of physical therapy, I was able to start running again, then I hurt my other knee. This is the first MCM since surgery and Zach said there was no way he wasn’t going to be with me.”

“My chances to ever run again weren’t good, so every run is special,” he added. “But this will be memorable. Having the opportunity to return to where we ran our first marathon together is priceless.”