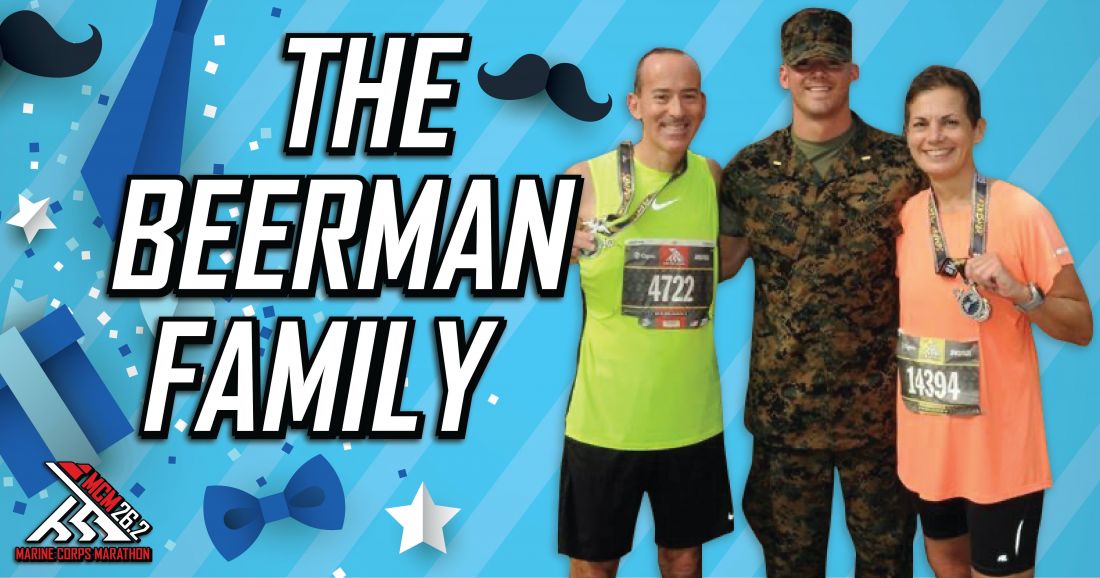 “I wonder how many times in the history of the Marine Corps Marathon (MCM) have parents had the honor of their son or daughter placing a finisher’s medal around their neck?”

That’s what Brian Beerman was thinking as he crossed the MCM finish line in 2019 to the sight of his son 2ndLt. Michael Beerman waiting to hand his parents their medals.

It was a proud full-circle moment for the senior Beerman who ran his first marathon at the 1997 MCM. That year, his wife Molly was waiting for him at the finish line with a six-year-old Michael sitting on her shoulders so he could see his dad running with the Marines.

“I played sports my whole life until around the time Michael was born when I was 28,” said Beerman. “Five years and 25lbs later, I got into running to get back into shape, but more importantly to adopt a healthy lifestyle so that I can be around for my family as long as possible.”

Beerman started off on an exercise bike until a friend talked him into running. He attempted his first five-mile race in the spring of 1997 and subsequently the MCM that fall. He was hooked. So, 46 marathons and 22 MCMs later when he found out his newly commissioned son was not only going to be working “The People’s Marathon,” but would also be at the finish line, the Beermans seized this confluence of good fortune to orchestrate a special moment.

“To be running the marathon with my wife [running her 12th MCM] by my side and knowing that our son, an officer in the U.S. Marine Corps, would be placing the finisher’s medal around our necks felt very uniquely special,” said Beerman. “It was just unbelievable to me.”

For this proud father, a #RunWithTheMarines means he gets the honor and privilege to run with and be cared for by the brave men and women of the U.S. Marine Corps who selflessly serve to protect the Nation’s freedom. But it was even more meaningful to run this time with Michael standing ready to salute his parents’ accomplishment.