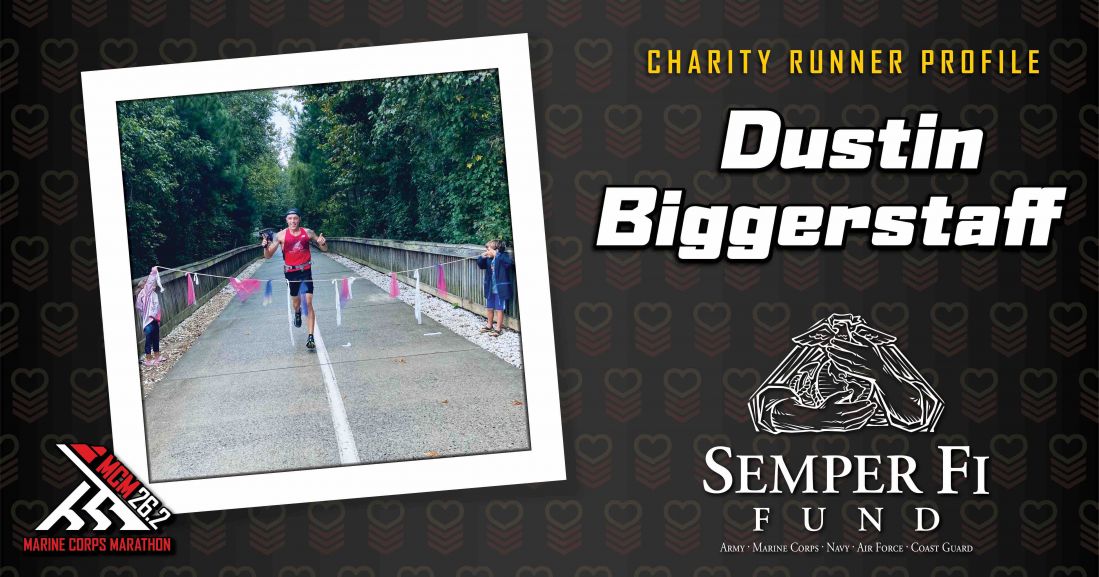 “From what my family has told me, I didn’t crawl for long before I was walking and once I got rid of the baby deer legs, I was off running,” said 34-year-old Biggerstaff.

Biggerstaff was playing soccer by the age of 5 and running track and cross country by the age of 10, earning athletic scholarships to college for each sport. Running has always been his version of yoga, a way to find his chi and clear his mind of anything and everything that’s bothering him.

So, when the nine-year Amphibious Reconnaissance veteran medically retired from the United States Marine Corps in August 2019, it was kismet that he heard of Semper Fi & America’s Fund and only natural that he joined the organization as a Community Athlete (fundraiser).

“During my last year in the Marine Corps, as I was being medically processed out, I found out about the organization through my next-door neighbor who had been medically retired and was part of Semper Fi Fund,” said Biggerstaff who suffered multiple injuries to his left eye during training and deployment. “After speaking with him and his wife and seeing how it had positively impacted their lives and many others, I started doing my research on how I could get involved.”

Biggerstaff said he was blown away by the welcome he received and how much help he and his family were offered as they transitioned to civilian life.

“I joined the Fund’s sports program (Team Semper Fi) where I was then able to maintain my recovery/therapy through sport, raise awareness and funds for the Fund, and challenge myself like I never thought I would before,” noted Biggerstaff.

An avid marathoner and ultra-runner, Biggerstaff completed his first Marine Corps Marathon (MCM) in 2019 with a time of 03:08:53 and plans to run the MCM50K this year, while raising $10,000 for the Fund.

“As of today, I haven’t yet reached it; I’m currently over $6,000 and doing everything in my power to rally up the rest,” said Biggerstaff. “It has been difficult with this year’s pandemic, but I am still in awe on how giving people have been.”

With the MCM and many races shifting to virtual events, it’s been a challenge for many. For Biggerstaff, who also has a goal of running 2,020 miles, the year has been a battle both physically and mentally, but being a part of Team Semper Fi played a huge role in keeping him motivated.

“Since I started running for the Fund, during a race, whether in person or virtual, I remind myself of my why,” said Biggerstaff. “Why am I doing this? For me, it is a couple of things and some are similar to why I joined the Marine Corps in the first place. I’m doing it for those who can’t, for those who won’t, for myself and for my family.”

“As I started my family I made a promise to my wife, my kids, and to myself that I would always be the father who not only supported them financially and emotionally in whatever they wanted to do in life, but I would maintain a level of physical fitness that would always allow me to be active and partake with them in their desired goals as well,” he continued. “I also made it a point to be a great example of making physical and mental fitness a top priority in life, especially in today’s digital age when it seems like everyone I see is so wrapped up in their electronics and lose sight of what it feels like to be outside.”

Dustin will be virtually cheering for all those running their MCM events over the next few weeks and encourages everyone, especially the first-timers, to “be gentle with yourself and understand that it is OK if you have to slow down, walk or even take a break, but do not quit.”