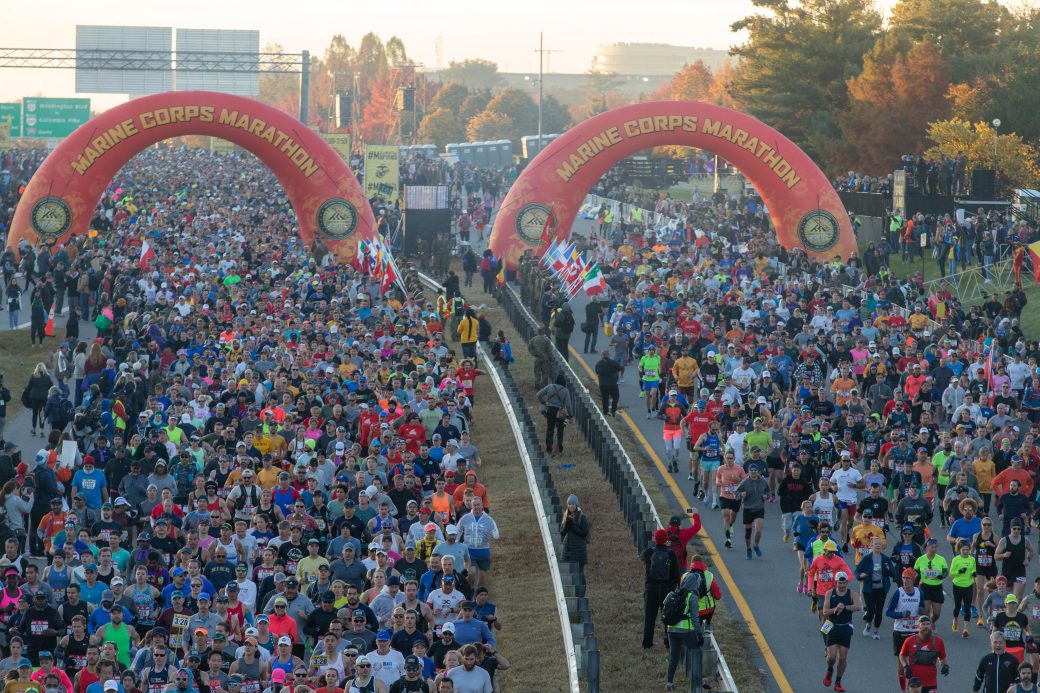 All the news related to “The People’s Marathon,” read the eNewsletter sent to all registered participants or the official media releases of 2015.

January 2015 – RunWithTheMarines…half the miles, all the excitement!

Give the Gift of Health and Fitness; Run With the Marines in 2016

With the ‘mad dash’ and stress of the holidays upon us, this is a perfect time to give the gift of health and fitness to your loved ones – and to treat yourself. Family and friends can #RunWithTheMarines in 2016 with online registration on sale now for both the Marine Corps Historic Half and new Semper Five miler, which will be hosted on Sunday, May 15 in Fredericksburg, VA.

More than 1,100 runners gobbled up the course donning turkey hats, costumes and gear to celebrate the start of the holiday season at the Turkey Trot 10K and Turkey Trot Mile on Marine Corps Base Quantico, VA. Today marked the conclusion of the 2015 MCM Event Series annually held through November.

The Marine Corps Marathon (MCM) on Sunday, Oct. 25 celebrated 23,194 runners to a successful finish at the 40th anniversary of the event. The MCM10K presented by Aetna enjoyed its largest participation and closest finish. The events were held simultaneously in Arlington, VA and throughout the nation’s capital.

The Marine Corps Marathon (MCM) today announces the Gaylord National Resort and Convention Center as the event’s new headquarters hotel and host venue of the Health & Fitness Expo beginning with the 41st MCM on October 2016. The Gaylord national Resort is located at National Harbor, the waterfront entertainment district, in Prince George County, MD, which is less than 10 miles from the MCM start in Arlington, VA.

The Marine Corps Historic Half to be held on May 15, 2016 in Fredericksburg, VA will open registration on Wednesday, Oct. 21. Unlike previous years when the Historic Half employed tiered pricing (a practice of elevating the fee as the event draws near) the 2016 Historic Half will now introduce in-demand registration as a reward for motivated runners who commit early. As more runners sign up and registration plateaus are reached, the fee increases from its starting amount of $70.

MCM Runners, Families to Link Up in Rosslyn at Finish Festival

The thousands of MCM and MCM10K finishers will meet their families in the MCM Finish Festival located in Rosslyn, VA on Sunday, Oct. 25. Open from 8-4pm, the MCM Finish Festival offers runners and spectators a bounty of excitement, information, recovery services, food sampling and entertainment. The Arlington Stage, located on Wilson Blvd and North Moore Street, will feature several live musical performances by the U.S. Marine Corps Rock Band from Marine Corps Base Quantico and the patriotic trio of “United We Sing,” as well as an appearance by Brookstone Brand Ambassador, Dolvett Quince, the hugely popular trainer on the NBC television show, “The Biggest Loser.”

In recognition of the 40th anniversary of “The People’s Marathon,” the Marine Corps Marathon (MCM) is inviting the public to join in a “Celebration Concert” on Friday, Oct. 23 from 3 to 4 p.m. The MCM Celebration Concert is free and will be held in the family-friendly atmosphere on the Woodrow Wilson Plaza, located outside the Ronald Reagan Building at 1300 Pennsylvania Avenue NW Washington, D.C.

Media are invited to attend the 40th Marine Corps Marathon (MCM) Press Conference on Friday, Oct. 23 to hear the MCM make a significant announcement regarding the future of the event. Doors open for the event at 1 p.m., with the MCM Press Conference beginning at 1:30 p.m. The National Press Club is located on the 13th floor at 529 14th Street NW in Washington, D.C.